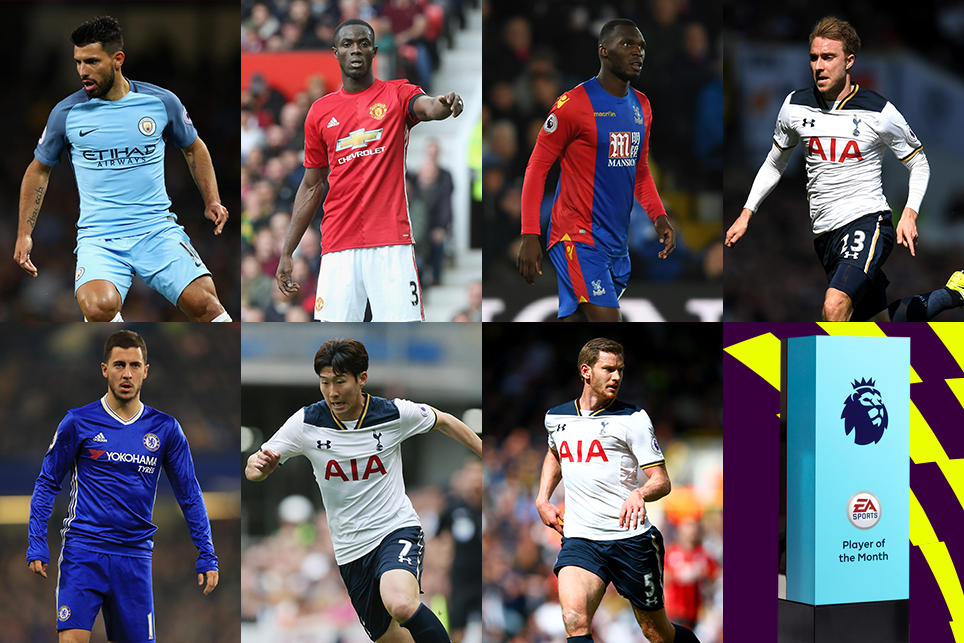 You can help decide between Son, Eriksen, Bailly, Hazard, Vertonghen, Aguero and Benteke for April's award

Seven players who stood out for their performances in April have been nominated for the EA SPORTS Player of the Month award.

Tottenham Hotspur are well represented in the shortlist, with Son Heung-min, the joint-top scorer in the Premier League last month, looking to win for the second time this season.

Vote for your Manager and Goal of the Month >>

The joint-highest scorer in April with five goals in four consecutive matches, including the one that put Spurs ahead in their late fightback at Swansea City.

No player created more than Eriksen's 21 chances for Spurs, two of which resulted in goals. He also scored twice, including the 30-yard winner at Crystal Palace.

Hazard's four goals included both in the 2-1 win over Man City. He also created 18 chances, playing 141 passes finishing in the final third and completing 13 dribbles.

Played his part in Spurs' five clean sheets, winning 90% of his tackles. In possession, he made 375 successful passes and completed eight dribbles.

Scored five times across five different matches, including against Arsenal and Chelsea, while setting up a goal and creating 10 other chances.

Benteke scored five times, including the winner at Chelsea and twice in the 2-1 win at Anfield. He created eight chances, including one assist, and won 65 aerial battles.