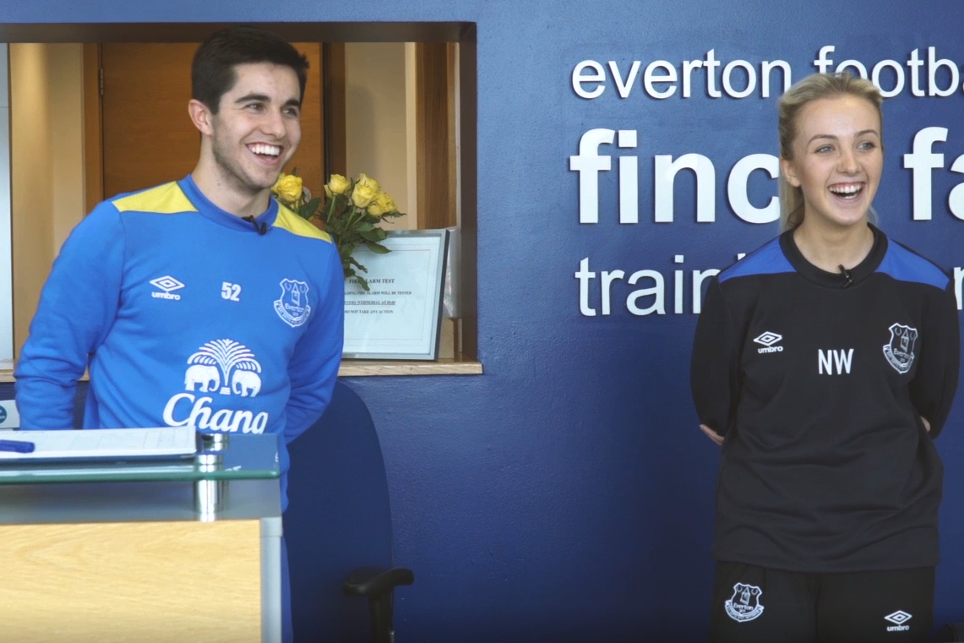 Everton celebrated National Apprenticeship Week this month by getting their academy players to understand better what apprentices at the club do.

The club relaunched their apprenticeship programme last year, in partnership with Riverside College in Widnes, and now have 68 people enrolled on the programme, with 34 based across the club, their Football in the Community programme and Everton Free School.

🙌 | #EFCU23 duo @liamwalsh_6 & @harrycharsley swap the pitch for an office to discover what life is like on the #EFC business side. #NAW2017 pic.twitter.com/zjmtk7vckC

Walsh, winner of the PL2 Player of the Month for February, and Charsley carried out Woods' daily jobs at the USM Finch Farm training ground, before she spent time on the pitch training with them.

"It's really different to what we do but she obviously works really hard," Walsh said. "I had no idea how much went into it!"

For Nicola, the job swap was an enjoyable part of an already rewarding role at the club.

"Everton in the Community has been amazing in kickstarting my career," she said. "It's given me a head-start in the workplace whilst allowing me to gain qualifications."

Another person to benefit from Everton's apprentice scheme is Dylan Dickinson.

A lifelong Evertonian, Dickinson works on the school education team and also has taken part in the National Citizen Service project as well as taking leadership, PE and school sports apprenticeships.

"I'm absolutely loving every minute of being an Everton apprentice, it simply doesn't feel like a job and brings nothing but fantastic experiences," Dylan said.

"The work ranges from practical work to the theory side and the support I have had from the staff has been superb, they are always there to help and are genuinely invested in me doing well."

Some 84% of Everton apprentices successfully complete their full Apprenticeship framework, compared with a national average of 74% and Everton have become the first Premier League club to be included on the new official Register of Apprenticeship Training Providers.

🔵 | #EFC becomes the first main apprenticeship provider in the @premierleague.