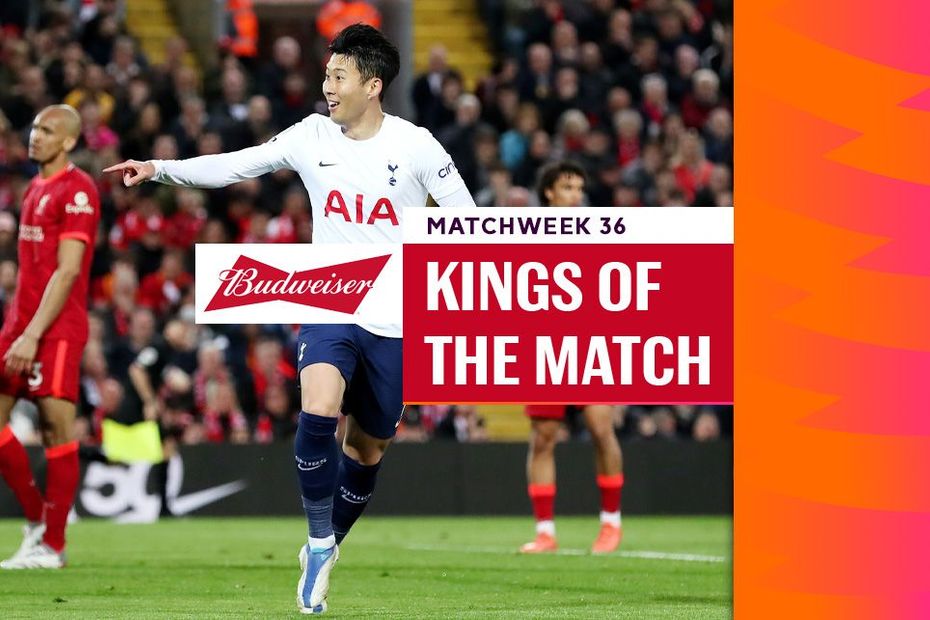 See which players have earned the backing of supporters, including Spurs' Son Heung-min

After the final whistles in Matchweek 36 of 2021/22, thousands of supporters have voted to crown their Budweiser Kings of the Match.

The Brentford defender headed in the opener to set his side on their way to a first win in three matches.

A quick-fire brace from the Chelsea striker gave his side a commanding lead, before they were pegged back at Stamford Bridge.

The Ivorian scored the decisive goal from the penalty spot and his goal was enough to confirm Watford's relegation.

Took over half the vote, having scored one goal and assisted two others as Brighton & Hove Albion stunned Manchester United.

Reached 20 Premier League goals for the first time after netting the opener for Tottenham Hotspur at Anfield.

Two goals in five first-half minutes earned Nketiah a huge 80.6 per cent of the vote as Arsenal tightened their grip on fourth place.

Made several vital saves to help Everton claim another crucial victory and move out of the bottom three.

A first-half brace from the Algerian helped West Ham United ease to victory at Carrow Road.

The Belgian was brilliant once again, creating the third goal as Manchester City edged further ahead in the title race.

The Liverpool forward scored his 15th Premier League goal of the season to keep up his side's title push. He has also now scored seven goals in nine PL matches against Aston Villa.

Scored a brilliant opener and then cleverly created the second as Chelsea tightened their hold on third place.

The striker scored twice, to take his Premier League tally for the season to 12, as Leicester beat Norwich 3-0.

The Manchester City midfielder scored four times and hit the post in the 5-1 win at Wolverhampton Wanderers.

Netted two goals to claim the majority of the vote as Tottenham Hotspur closed in on fourth-placed Arsenal with a 3-0 win on Thursday.