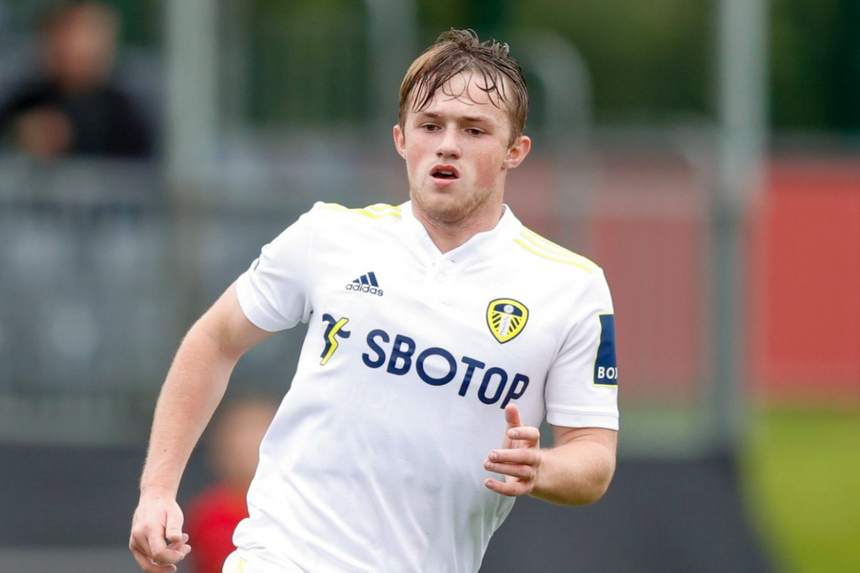 Leeds score four, including two wonder strikes, as we look at the best moments from Premier League 2

Two spectacular strikes from Joe Geldhardt helped Leeds United to a thumping 4-0 win at Liverpool, as we look at standout highlights from this weekend's Premier League 2 matches.

Gelhardt scored the first of his brilliant brace in their Division 1 match, picking up the ball 45 yards out and firing a left-foot shot beyond goalkeeper Marcelo Pitaluga.

The 19-year-old turned provider for Amari Miller to make it 2-0 and Pascal Struijk headed in a third to put Leeds in control.

Gelhardt rifled in a fourth from distance and was only denied a hat-trick by a fine late penalty save from Pitaluga.

Elsewhere in Division 1 an Arsenal side reduced to 10 men after Omar Rekik's dismissal on 36 minutes triumphed 6-1 at London rivals Chelsea.

Mika Biereth netted a hat-trick and Folarin Balogun struck twice, before an own goal from Lewis Hall made it 6-0. Jayden Wareham pulled a late goal back for Chelsea.

The Gunners were also firing in the goals in a London derby victory at Under-18 level this weekend, with Charles Sagoe Jr scoring a brilliant winner to secure a 2-1 U18 Premier League Cup success at West Ham United.

We need to talk about this Charles Sagoe Jr winner 🤩

With the scores level in the 89th minute of our under-18s' Premier League Cup match at West Ham, Charles did THIS to give us the W 🙌 pic.twitter.com/vXkrdFBJkp

A late goal from Zidane Iqbal secured a 2-1 win for Manchester United against Brighton & Hove Albion for their first win of 2021/22.

Anthony Elanga fired the Red Devils ahead from the penalty spot but Swiss striker Lorent Tolaj levelled on the hour.

Iqbal's winner in stoppage time ended the Seagulls' unbeaten start to the season.

Penalty save not enough

In Division 2, substitute goalkeeper Ollie Wright's stunning penalty save from Max Thompson wasn't enough to prevent 10-man Southampton slipping to a 2-0 defeat at home to Burnley.

Wright came on following a red card for Harry Lewis in the 31st minute, before Sam Unwin and Ne-Jai Tucker secured victory for the Clarets.

Ollie Wright guesses the right way to keep Saints B in the game! [0-1] pic.twitter.com/W49kaaVS9L

Quiz How much do you know about the season so far? Test your 2021/22 Premier League knowledge