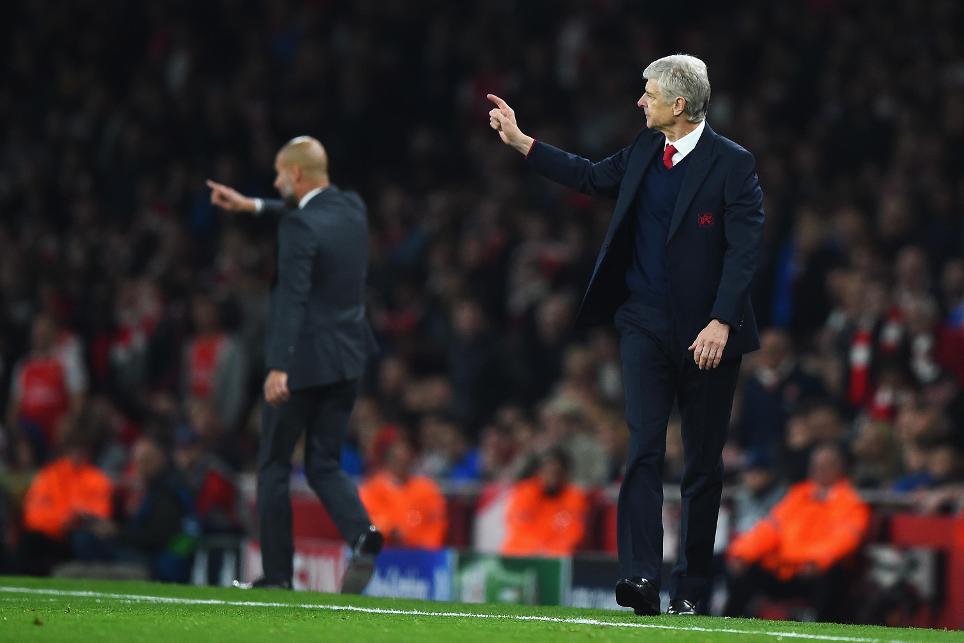 When Pep Guardiola and Arsene Wenger meet one another it is always a match worth watching.

Ahead of Sunday's contest, Adrian Clarke picks out some of the key factors that could decide the first Premier League match-up between the two.

Over-elaborating at the back has caused Manchester City problems in recent weeks. If those mistakes are repeated, Arsenal are well equipped to cash in.

With Alexis Sanchez as the enthusiastic spearhead of their attack, the Gunners are pressing significantly better in 2016/17.

Sanchez is an irritant to central defenders, who are rarely afforded the luxury of time on the ball when he closes them down.

Gary Cahill discovered this to his cost, when Sanchez robbed him of the ball to score against Chelsea in September.

The Chilean's appetite has rubbed off on his team-mates; as a collective Arsenal are winning turnovers in better areas, far more often, than before.

Given his strong philosophy, it is unlikely Guardiola will discourage his defensive players from passing out from the back but risks should be avoided in this fixture.

Provided Arsenal press as hard as usual (if they do not it will be a sign of nerves) City's distribution inside their own half will need to be sharp and accurate. If it is not, they will be caught out.

Across the first few matches of this campaign, Kevin De Bruyne caught the eye in a central attacking role. Powering down the middle, the Belgian’s running power and creativity was outstanding.

Since then, a dramatic tactical shift has occurred.

While his starting position is not too different, De Bruyne is now drifting towards the flanks far more regularly (see the heat maps below), firing in a stream of difficult crosses.

As shown in the table below, the change in his output from the wings is remarkable.

Will this have been done at the request of his new head coach? I believe so, as none of City's other wide men possess the same level of technical excellence in abundance.

Topping the PL rankings for "most successful crosses that are not a corner" with an impressive 21, the Belgian will make Arsenal nervous every time he shapes up to deliver from the flank.

This strategic alteration has created quite a difference to City’s style of play on home turf.

In their first three matches at the Etihad Stadium, Guardiola's men made an average of only 11 crosses from open play, preferring to instead slip clever passes into the box.

In the five home league matches that have followed, that number has doubled to 22.8.

Conceding twice from crosses against Everton in midweek and letting in several goals from right-wing deliveries this season, this Arsenal weakness may well be targeted.

Countering will be critical

City and Arsenal are two of the best counter-attacking sides in the country, but because they like to press high and push bodies forward, both are also susceptible to fast transitions.

This means that breakaways will be of paramount importance on Sunday.

Conceding four times on the break against Chelsea and Leicester City, Guardiola's team are having a lot of problems in this area. But what is to blame?

With no set formation or regular starting XI and a head coach who loves to stretch his players' minds with tactical instructions, City's players have at times looked confused as to which positions to take up.

Experimenting with various shapes, deploying players in unfamiliar roles and having a shortage of pace at the back, are all contributing factors.

When you list the top speeds of Arsenal's forward line and compare them with Guardiola's likely defence, it is apparent that the Gunners hold a significant speed advantage.

How Arsenal compare with Man City for speed

With City likely to dominate possession, they would be advised to be careful and not push too many men forward at once. It will be crucial for their central midfielders to shift across to offer cover, too.

If City's defenders find themselves stretched and involved in one v one races against Arsenal's players, it could spell trouble.

At the other end, Arsenal's defence is quick enough to cope with City's attack. It is their positioning and decision-making that will be tested most when they face a counter.

Attack is the best form of defence for both teams and their respective managers, so it is hard to envisage Sunday's encounter turning into a cagey affair.

As well as the importance of turnovers and counter-attacks, defence-splitting through-balls are likely to play a key role, too.

When it comes to creating chances with a pass that dissects the opposition, you will not find two more dangerous sides in the Premier League than Manchester City and Arsenal.

Mesut Ozil and David Silva are experts at slipping accurate balls in behind for team-mates to run on to, but it is Sanchez who stands out; when the ball is at his feet, Sanchez is always looking to play somebody else in behind.

Most through-balls by teams and players 2016/17

With Arsenal's first-choice centre-back partnership broken up by Shkodran Mustafi's hamstring injury and City still searching for a consistent combination at the back, do not be surprised to see gaps exploited by searching passes on Sunday.

With only one clean sheet between them in their last 14 Premier League matches combined, neither defence is sure-footed at the moment. It would be surprising if both teams do not score at least once.