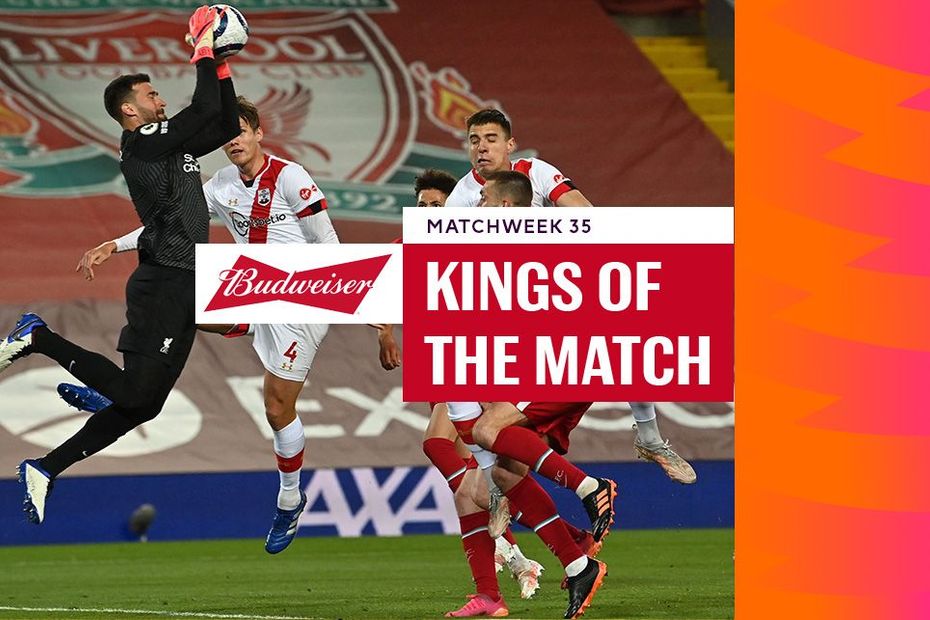 See which players have earned the backing of supporters, including goalkeepers Alisson, Edouard Mendy and Nick Pope

Supporters have been voting in their thousands to crown their Budweiser Kings of the Match in Matchweek 35.

Shortly after the final whistles, fans across the world have been choosing their top performers via the official Premier League website and app, and here's who has come out on top.

The Leicester City forward claimed 56.7 per cent of votes after his late goal gave the hosts hope in their defeat by Newcastle United.

Taking over half of the votes cast, the Northern Ireland international put Leeds United ahead in their win at Elland Road.

The Crystal Palace midfielder scored one and created another in an influential display. He claimed over two-thirds of the vote.

An impressive six saves earned the Liverpool goalkeeper his eighth clean sheet of the season and the King of the Match award.

The Wolverhampton Wanderers winger came off the bench to level with a superbly worked goal.

The Portuguese playmaker stroked home from the penalty spot to level the scores and set Manchester United on the way to yet another comeback win.

Taking nearly two-thirds of the vote, the 24-year-old struck his 16th PL goal of 2020/21 to keep Everton's European hopes alive.

He produced an inspiring performance both at the back and going forward, where his vision set up Emile Smith Rowe's opening goal.

The goalkeeper delivered a commanding performance as Burnley secured their PL status at the expense of Fulham.

The 19-year-old took his tally to six goals in as many appearances to pip match-winner Caglar Soyuncu in the vote.

Two smart finishes on the forward's return from injury helped Southampton battle back from a goal down.

Arsenal's match-winning midfielder produced an accomplished all-round performance in the win over Chelsea and won 56.5 per cent of votes.

The Villans' goalkeeper made a stunning late save from Calvert-Lewin to prevent Everton from taking three points.

The marauding full-back turned in a fine display in Liverpool's win and won 32.8 per cent of the vote, edging out Fernandes.