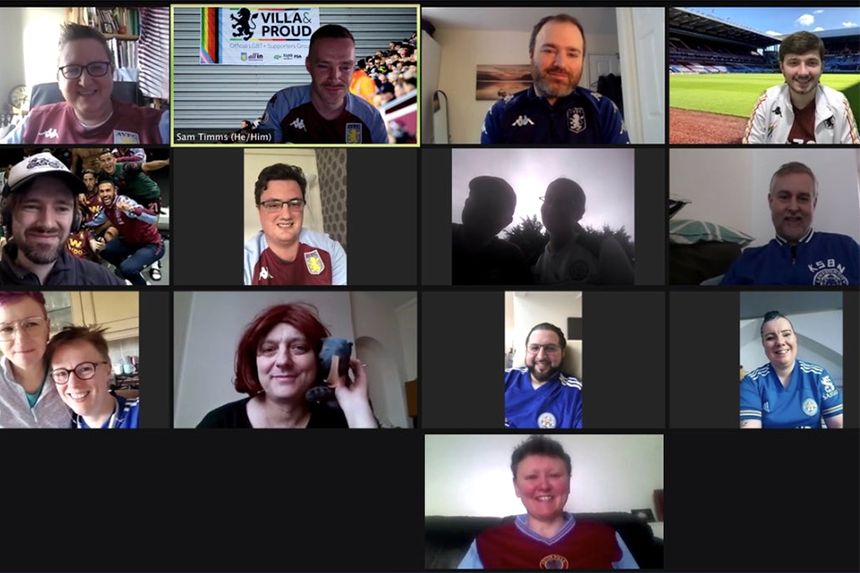 While isolation has proved a challenge for many during the past year, members of Villa & Proud, the official Aston Villa LGBT+ supporters' group, have reached out and engaged with fellow fans across the globe.

Prior to last Sunday's match with Leicester City, some Villa & Proud's members from as far afield as the United States took part in their latest virtual pre-match Social with fellow LGBT+ supporters group Foxes Pride.

"In a time where people are being kept apart, it is a wonderful way to bring fans together and keep spirits up," US Villa fan NJ told the official club website.

The Villa & Proud online Pre-Match Socials, which have been running since June 2020, focus heavily on mental health, tackling isolation and promoting inclusion, key objectives to also help fans feel closer to the club.

"The pre-match socials have kept me going through lockdown," adds Michelle.

"They've introduced me to some amazing new friends and made me feel even more like a member of the Villa community.

"Knowing there are other LGBTQ+ Villa fans brings a kind of mental strength that I didn't know I needed."

Villa & Proud launched in November 2018 and now has over 2,500 followers on social media. They were recently shortlisted for the Football Supporters' Association's Fans For Diversity Award along with Villans Together.

Part 1: Rainbow Blades connecting fans during pandemic
Part 2: Become an LGBT ally with PL Primary Stars
Part 3: 'With Fulham I'm never afraid to be who I am'
Part 4: 'Proud Baggies are more important than ever'
Part 5: 'We feel like we are valued by Leicester'
Part 6: 'Pride of Irons is just like a family'