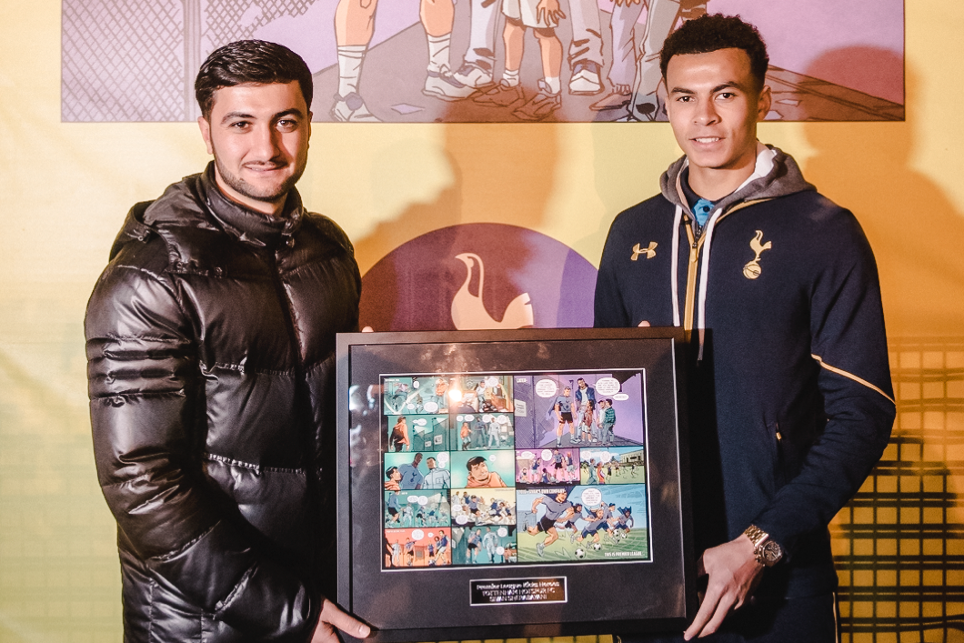 The campaign recognises inspirational individuals who have come through the programme over the past decade and celebrates their achievements.

Spurs' Kicks Hero is former participant Sivan Sherabayani, who was part of the first group of young people to take part in the Premier League Kicks programme.

Following support from the Tottenham Hotspur Foundation through this programme, Sivan now runs his own weekend coaching programme for 2-7 year olds and has completed his FA Level 1 coaching qualification.

"When I first started taking part in the Kicks programme, I could never have imagined that I would now be running my own business," said Sivan, who was presented with a personalised comic illustration at the Ferry Lane event. "The team at Tottenham Hotspur Foundation inspired me and helped give me the confidence and drive I needed to reach my full potential. I couldn’t have done all this without them and Kicks."

As part of the anniversary celebrations, each of the professional clubs running Premier League Kicks sessions will be asked to nominate a 'Kicks Hero', someone who has taken part in, volunteered to help at or worked on the programme and who has inspired others through their dedication, work ethic and own personal development.

This individual's story will then be immortalised in a comic illustration designed by Marvel and DC Comics artist John McCrea, whose credits include Spiderman, Superman and Batman.

Alli, who presented Sivan with the comic strip added: "It's great to be here today to see Sivan and other Kicks participants enjoying their football and making new friends.

"Tottenham Hotspur Foundation have done a great job and the team deserve a lot of credit for the hard work they've put in over the past 10 years in making sure people get the opportunity to use pitches and facilities like this one."

The PL Kicks youth outreach programme began 10 years ago, with the aim to create safer, stronger and more respectful communities through the development of young people's potential, while giving young people access to facilities, coaching and mentoring.

"Premier League Kicks is a fantastic initiative that has and continues to do great work in our local area and around the country," said former Spurs captain Ledley King, who appears in Sivan’s comic strip. "I was here to launch the national expansion 10 years ago, and I've seen first-hand how it increases footballing opportunities and develops routes into education and training for young people."

PL Kicks has had a significant impact in its first decade, with more than 180,000 young people engaged in weekly football, sport and personal development sessions held at local community venues across the UK.

"Returning to one of the original Premier League Kicks sites at Ferry Lane is a reminder of just how far the programme has come over the past 10 years and how many young people's lives have been positively impacted," said Scudamore. "Premier League Kicks delivers sessions for young people where they are needed most, connecting football clubs with their communities in a meaningful and sustainable way.

"The Kicks Heroes campaign allows us to highlight some of those inspiring individual stories, like Sivan's, celebrate their achievements and thank the 68 Premier League, English Football League and National League clubs currently delivering the programme.

"The anniversary is also a chance to thank our highly-valued partners in Sport England, and we should also acknowledge the contribution of the Metropolitan Police who were so important in originally establishing the programme.

"When we launched this programme 10 years ago, the young people involved stressed that they wanted this to be a long-term initiative, and through the help of the clubs we have achieved that goal. I can't wait to see the stories the next 10 years bring."

Sports Minister Tracey Crouch added: "Over the past decade Premier League Kicks has made an invaluable contribution to the lives of tens of thousands of young people across the country, encouraging them to get into the game in a safe and secure environment that has brought communities together.

"There are so many brilliant inspirational stories of how people have benefitted from their involvement in the project and I hope it will benefit thousands more in the years to come."

The event was also a proud moment for the Tottenham Hotspur Foundation, who alongside Manchester City, Fulham and Brentford, piloted the programme 10 years ago.

"Kicks on Ferry Lane was one of the first of its kind and there are so many inspiring stories to emerge from the project, including some who have come from tough backgrounds to turn their lives around and gain positive outcomes, some of whom are now even working at Kicks as a coach," Grant Cornwell MBE, Chief Executive, Tottenham Hotspur Foundation said.

"Coaches on our Kicks projects all come from the local area which we feel is hugely important when it comes to being able to engage with some of society’s most hard-to-reach young people – having an understanding of the challenges they face and being able to act as positive role models."

See: What is Premier League Kicks?