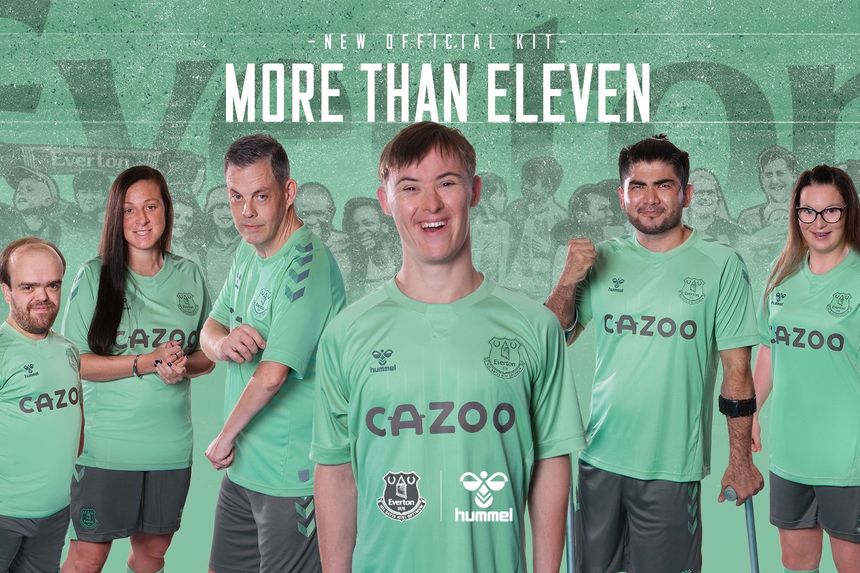 For the launch of their new third kit, Everton turned to their disability team to mark the 20th anniversary of the club's Everton in the Community Disability Programme.

And as a result, the club smashed their record for opening-day third kit sales, beating the previous high set in 2019/20 by 41 per cent.

One of the disability players to launch the kit was James Ditchfield, pictured third from left, who suffers from cerebral palsy but has not let his condition hold him back.

He is one of the club's longest-serving players, joining as a student when the programme launched in 2000.

Having already fulfilled a lifelong ambition of representing the Toffees, he described being part of the photoshoot as an unbelievable experience.

"I remember sitting on my grandad's knee at Goodison Park as a five-year-old, saying to him that I was going to play for Everton one day," James told the club's official website.

"When I tell people that I play for Everton, I still get shivers down my spine - I still think to myself, 'is this real?'

"Twenty years later I am doing what I love doing, playing for the badge. To take part in the photoshoot and be one of the first people to see and wear the kit is unbelievable."

Founded in 2000, the Everton in the Community Disability Programme has engaged  more than  1,200 disabled people in  sport, education,  training  and volunteering in the past year alone.

To celebrate the anniversary, Hummel has pledged to invest directly into Everton's disability projects.