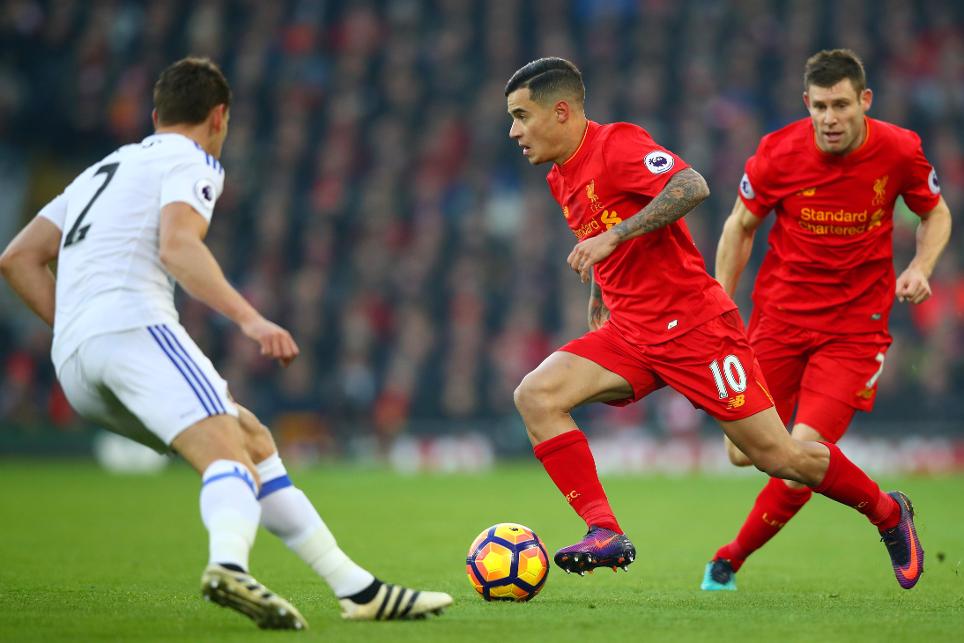 The Brazilian's ankle injury has urged over 400,000 to shop for an alternative

Liverpool have announced that Philippe Coutinho (£8.6m) is likely to be out for a few weeks with an ankle injury, and Fantasy Premier League managers are already taking action and lining up replacements.

The top-owned FPL asset prior to Gameweek 13, Coutinho has been sold by more than 400,000 managers following Saturday's 2-0 win over Sunderland.

He has subsequently dropped by £0.2m in price, a trend that looks likely to continue prior to Gameweek 14.

Coutinho's potential setback has had a marked effect on FPL transfer trends.

Walcott is the hottest property ahead of Saturday's 11.30 deadline.

A sixth goal of the season in Sunday's victory over AFC Bournemouth promoted his cause, and with West Ham United and Stoke City to come in his next two outings, his short-term prospects appear promising.

Potential rotation over the busy festive spell could be a concern, though, particularly once Olivier Giroud (£8.9m) recovers from a groin injury that makes him an early doubt for the trip to London Stadium on Saturday.

📰 An official injury update on @Phil_Coutinho.https://t.co/9rYETXUeKu

A key figure both from open play and set-pieces, the Iceland international has scored or assisted 50% of Swansea's goals this term.

Having returned points in four of his last five Gameweeks and seven of the last 10, he has shown strong form and an unerring consistency, despite early struggles under new manager Bob Bradley.

With a kind schedule to follow, Sigurdsson looks well-placed to flourish further and fill the void left by Coutinho in FPL squads.

But there are other candidates.

Seen as a like-for-like replacement for Coutinho, Mane trails the Brazilian by just eight points following his assist in the Gameweek 13 win over the Black Cats.

The major concern is that Coutinho's absence could disrupt Liverpool's attacking output, potentially limiting Mane's returns from this point on.

His involvement in the Africa Cup of Nations for Senegal in January, potentially before or at the time of Coutinho's return from injury, could also be a factor.

Alexis Sanchez (£11.3m) is the other midfielder residing in the top five transfer targets.

Undoubtedly a coveted FPL asset, given his price tag, he is only a potential Coutinho replacement for those freeing up funds elsewhere in their squads.

With three goals and four assists in his last six Gameweeks, the Spaniard's form is not in question.

But, like Walcott, he too could come under the threat of rotation over the busy month ahead.

Antonio Conte has Willian (£7.1m) fit and available to challenge for a start on the right of his attacking front three.