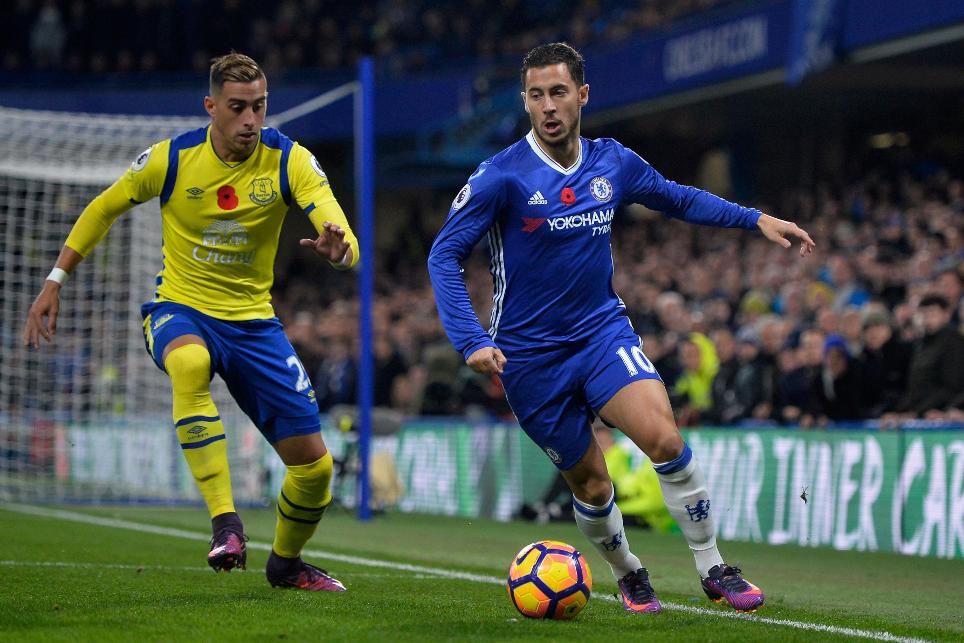 Hazard achieved a score of 62 in the Bonus Points System (BPS) - the highest tally of any player in Gameweek 11.

His two goals and an assist complimented a 94% pass-completion rate and three successful dribbles.

A rejuvenated Pedro (£7.2m) was awarded two additional points, scoring 53 in the BPS.

In addition to his first-half goal he completed 89% of 64 attempted passes, with three of those creating chances for team-mates.

Alonso also made four recoveries and two successful tackles, helping Antonio Conte’s side to a fifth successive clean sheet - the only side to register a shutout in Gameweek 11.

Diego Costa (£10.5m) failed to pick up bonus points despite bagging a goal and an assist.

The forward scored 35 in the BPS, losing out after being tackled on 11 occasions.

Costa clinched first place in the ICT Index thanks to a score of 19.9.

The striker fired in six attempts – all from inside the Everton penalty area – and created four goalscoring opportunities.

Stationed on the right flank, the former provided three key passes and managed eight touches inside the box, with two of his four attempts on target.

All three of Hazard’s accurate attempts on goal arrived from inside the penalty area.

The Belgian only created one scoring chance for his team-mates, yet he produced more successful passes in the final third (31) than any other Blues player.

Hazard has now supplied 52 FPL points in five appearances since Conte switched to a 3-4-3 formation, to sit on top of the overall standings with 82.

Having netted in four successive Gameweeks, the Belgian has been drafted in by 152,000 FPL managers since the weekend - more than any other player.

Costa’s goal and assist took him to the top of the FPL forward rankings on 73 points.

Boasting a 40.8% ownership, he has scored or assisted in nine of the opening 11 Gameweeks, though remains one booking away from a single-match suspension.

Pedro has now started each of the last four Gameweeks ahead of Willian (£7.2m), supplying two goals and four assists over that spell.

The pair have risen in price already this week, yet are owned by 1% and 2% respectively.

Ronald Koeman tinkered with his Everton tactics at Stamford Bridge.

The Toffees manager started the match with a 3-5-2 formation but reverted back to his preferred 4-2-3-1 set-up on falling 2-0 down.

Crucially for the Merseysiders, Idrissa Gueye (£5.0m) is available for the Gameweek 12 encounter against Swansea City after serving a one-match suspension.

But Gareth Barry (£4.6m) is now banned for that fixture after earning a fifth yellow card of the season.