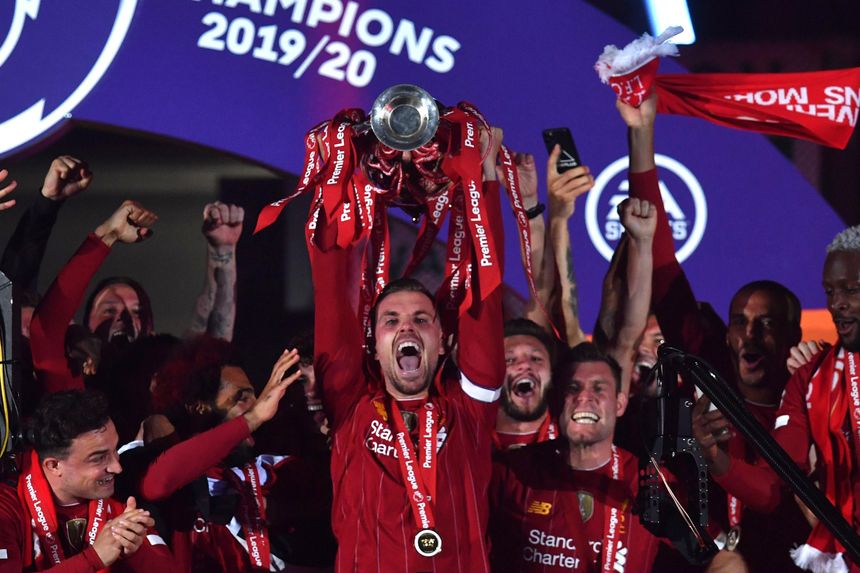 Liverpool won the Premier League Trophy for the first time as they ended a 30-year wait since their last top-flight title in spectacular style.

Jurgen Klopp’s side totalled 99 points, the club’s highest-ever total in a Premier League season and just one short of Manchester City’s competition record in 2017/18.

In a season that lasted 352 days due to a three-month postponement due to the COVID-19 pandemic, the Reds equalled Man City’s record of 32 wins.

Liverpool finished 18 points clear of Pep Guardiola’s second-placed defending champions, as they made history by winning the title with seven matches left.

A shock 3-2 defeat at promoted Norwich City in September was followed a week later by Man City’s biggest win of the season as they beat Watford 8-0.

But a 2-0 home reverse to Wolverhampton Wanderers at the start of October provided another setback to the Citizens’ hopes of securing a third consecutive title.

The first meeting between Liverpool and Man City in November ended in Klopp’s men claiming a 3-1 win that left the champions in fourth.

Leicester were in second, with their 9-0 victory at Southampton, the biggest-ever away win in English top-flight history, the highlight of an eight-match winning streak.

Chelsea made their all-time top goalscorer, Frank Lampard, head coach ahead of 2019/20 and his reign got off to a bright start, with Academy graduates Tammy Abraham and Mason Mount among their early-season stars as they moved up to third in early November.

With Tottenham Hotspur in 14th place following a 1-1 draw with promoted Sheffield United in November, manager Mauricio Pochettino was replaced by Jose Mourinho.

After Freddie Ljungberg stepped in as interim head coach, Mikel Arteta took charge of the Gunners in December.

For Spurs, Mourinho started with back-to-back victories and went on to finish his debut campaign at Tottenham Hotspur Stadium with a six-match unbeaten run and a sixth-placed finish.

Arteta also oversaw an upturn in fortunes at Arsenal. The Gunners could only finish eighth but they did win the FA Cup to secure a UEFA Europa League group stage place for 2020/21.

There were also managerial changes at Everton and West Ham United.

Marco Silva was replaced by Carlo Ancelotti at Goodison Park while David Moyes returned for a second stint with the Hammers, taking over from Manuel Pellegrini.

Ancelotti won three of his first four matches before guiding Everton to a 12th-placed finish.

West Ham lost only one of their final seven fixtures to finish 16th under Moyes.

Liverpool produced some scintillating football over the winter months, with their 4-0 win at Leicester on Boxing Day a standout performance.

A 2-0 victory over Manchester United in January followed by wins at Wolves and West Ham left Liverpool 19 points clear of Man City in second, having dropped just two points in their first 27 matches.

But the runaway leaders suffered their first defeat of the season at Watford, with Ismaila Sarr scoring twice as the Hornets won 3-0 under Nigel Pearson, who oversaw a mid-season revival for the relegation battlers after previous head coaches Javi Gracia and then Quique Sanchez Flores had left the club.

That ended a run of 18 consecutive Premier League victories for Liverpool – a joint-record winning streak by any side in English top-flight history.

But despite the setback the Reds were confirmed as Premier League champions for the first time when Chelsea beat Man City 2-1 in June, one of 92 matches played behind closed doors after the season resumed following the postponement from mid-March.

Three defeats in four matches during January had left Man Utd in fifth.

But the Red Devils’ fortunes turned following the arrival of Bruno Fernandes from Sporting Lisbon at the end of the January transfer window.

The Portuguese midfielder scored eight goals and provided seven assists as he played every match of Man Utd’s 14-match unbeaten run since his move to Old Trafford, winning the EA SPORTS Player of the Month award twice in succession.

Fernandes netted a crucial penalty, Man Utd’s Premier League record 14th of the season, at Leicester on the final day as Ole Gunnar Solskjaer’s men finished third and the Foxes missed out on UEFA Champions League qualification in fifth position.

Lampard’s Chelsea ended in fourth with a final-day victory over seventh-placed Wolves.

Despite failing to score on the final day, 33-year-old Leicester striker Jamie Vardy became the oldest player to win the Golden Boot, netting 23 times to finish one clear of Arsenal’s Pierre-Emerick Aubameyang and Southampton’s Danny Ings.

Sheffield United marked their return to the Premier League with an impressive ninth-placed finish.

Chris Wilder’s men conceded just 39 goals in the Premier League this season, the fewest for any promoted side in the history of the competition.

Burnley goalkeeper Nick Pope fell one clean sheet short of Ederson’s 16 shutouts for Man City in the race for the Golden Glove as Sean Dyche’s side finished 10th.

Following the 9-0 reverse to Leicester, Southampton, who were in the relegation zone up until mid-December, staged a remarkable recovery under Ralph Hasenhuttl to finish 11th.

Kevin De Bruyne was Man City’s star man in 2019/20 and registered his 20th assist of the season on the final day against Norwich, matching Thierry Henry’s record for the most in a Premier League campaign.

Relegation battle goes to the wire

Heading into the final day, promoted Aston Villa were competing with Watford and AFC Bournemouth to avoid joining already-relegated Norwich, who finished with a 10-match losing run, in the bottom three.

Villa were out of the drop zone on goal difference going into Matchweek 38, thanks to seven points from their previous three matches, and captain Jack Grealish scored the crucial goal as Dean Smith’s men drew 1-1 at West Ham to stay up.

AFC Bournemouth earned the win they needed to have a chance of safety, but Villa’s point meant their five-year stay in the Premier League came to an end.

That meant Watford had to beat Arsenal at Emirates Stadium to leapfrog Villa, but the Hornets lost 3-2 under caretaker head coach Hayden Mullins, who had succeeded Pearson with two matches to go.