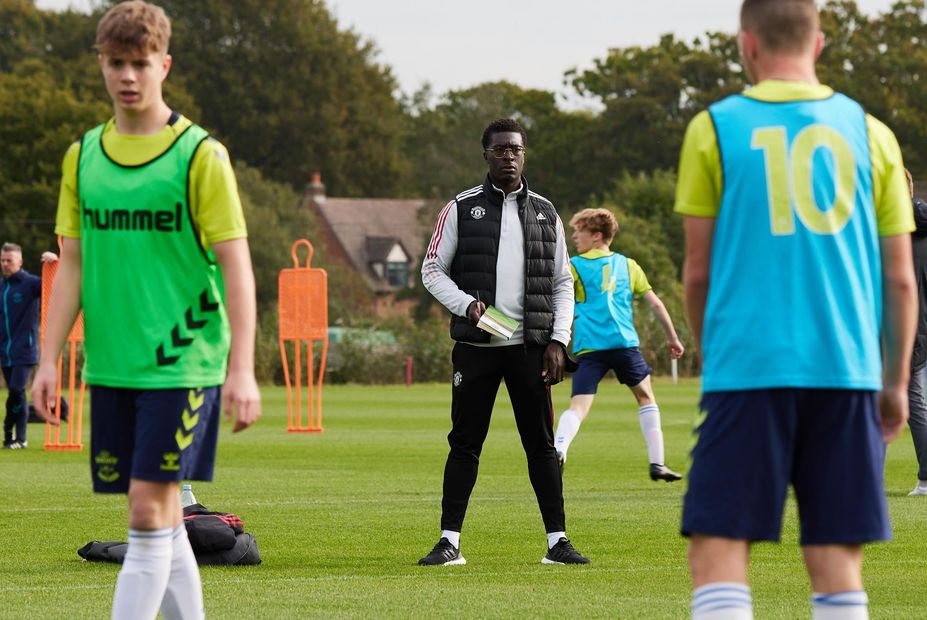 "There's things I've learnt today that have changed my way of thinking, my own philosophy."

Byfield was one of a number of participants in the Premier League's Professional Player to Coach Scheme who joined coaches from the Premier League's Coach Inclusion and Diversity Scheme at the event in Southampton to gain valuable insight to help their own development.

The coaches from the schemes watched a variety of training sessions from Under-9s up to the Under-23 level before having the opportunity to quiz the Southampton Academy coaches.

Iffy Onuora, Head of Equality, Diversity and Inclusion at the Premier League, says the event aims to give the coaches an idea of the philosophy that a Premier League club have around their coaching approach.

"Then hopefully we'll get to a stage where one day young coaches are asking them all the questions about their coaching journey."

Both the Professional Player to Coach Scheme (PPCS) and Coach Inclusion and Diversity Scheme (CIDS) seek to support the Premier League's aim to improve diversity and coaching pathways for black, Asian and other minority ethnic groups in football, as laid out in its No Room for Racism Action Plan and Elite Coaching Plan.

The PPCS is delivered in partnership with the Professional Footballers' Association Charity and the EFL, with all placements at EFL clubs. It aims to increase the number of black and Asian players who transition into full-time coaching roles in the professional game.

The CIDS, launched in 2020/21, is for male and female non-PFA members and those with no full-time coaching experience and features placements at Premier League clubs.

"The transition from playing to coach is difficult because it's such a different skill set," said Jon-Paul Pittman, who is at Exeter City as part of the PPCS.

"Having the people to be able to call on that have been there and done it is huge and that's only going to happen if there's a succession of coaches going through this sort of journey."

Coaches on the two programmes go on 23-month work placements, CIDS at Premier League clubs and PPCS at EFL clubs, helping them to achieve full-time positions where they can be role models to inspire a next generation of coaches from diverse backgrounds.

"There's a frustrated older generation who have never had the opportunity to coach or manage," Onuora said. "So what we want to try and do is, this younger generation... get more opportunities than the generations before them to give back to the game.

"A lot of players want to give back in some capacity, a lot around coaching, so this kind of scheme is important to unblock those difficult pipelines that are there."