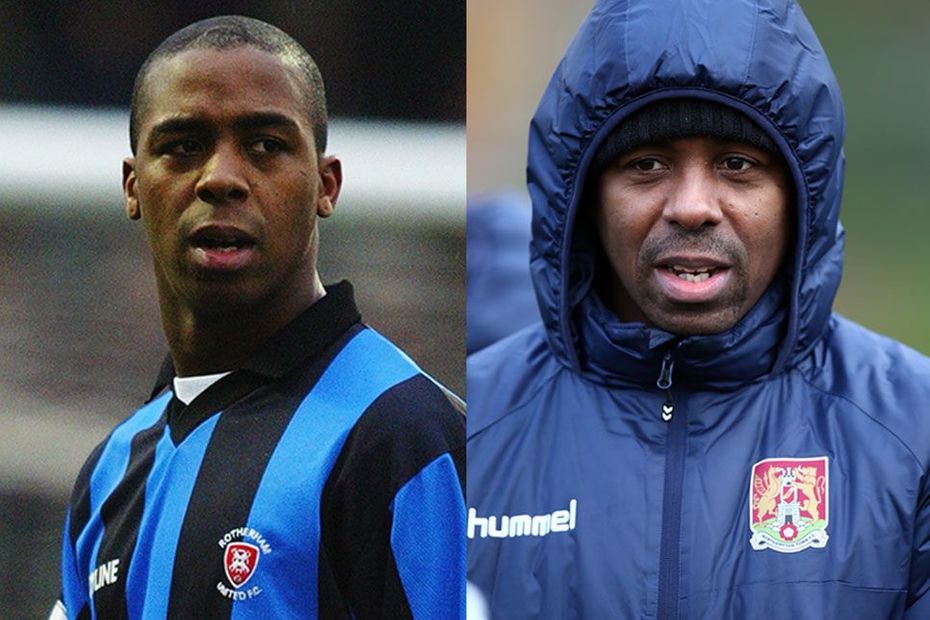 Darren Byfield racked up a wealth of experience during his playing career and is hoping it will help him as he embarks on the Premier League, EFL and PFA Charity's new Professional Player to Coach Scheme.

"I would be here all day if I went through all the clubs I played for," he said last year. "I had about 20, but I enjoyed every single one of them."

Byfield came up through the Aston Villa Academy but struggled to get into a first-team forward line that boasted Savo Milosevic, Dwight Yorke, Stan Collymore and Darius Vassell.

As a result, he started his odyssey of lower-league clubs, having spells with teams such as Walsall (twice), Rotherham United (twice), Sunderland, Gillingham, Millwall and non-league sides in the Midlands.

Byfield also had six matches early on at Northampton Town, where he now finds himself coaching as part of the Professional Player to Coach Scheme placement, launched last summer to increase the number of black and Asian players moving into full-time coaching roles.

"The scheme's massive and I don't use that word loosely," the 44-year-old said. "We’re well represented with black people playing professional football but when you look at staff, the board, we're not represented as much as we should be.

"I know so many stories of other black players, other Asian players, who can't get their foot in the door. And these are top ex-players who have played at the highest level - international, ex-international players, and they can't get jobs, which doesn't add up.

"So this is something where it is giving black and Asian people a chance to show their skills, get their foot in the door and have more of them on the professional coaching side of it and management side."

Byfield was coaching in non-league when the opportunity came to apply for the scheme, and it suited his planned pathway.

"I was shadowing [coaches] Richard Beale, George Boateng and Marc Delaney at Aston Villa and when I had a look at it, it was exactly what I wanted," he said.

"I knew once I stopped playing that I was going to go into non-league football, where I've now done four years. I always knew I was then going into an Academy at a professional football club to improve my skills. So, when I saw it, I thought that this had come at the right time."

Byfield's addition to Northampton Town's coaching staff will also benefit the club. Two of their last three managers have been of black origin, and Academy manager Ian Sampson wants the club to be part of the scheme to continue that promotion of diversity at various levels.

Briefly a team-mate of Byfield's, Sampson is pleased to have the former striker under his wing.

"He's got a wealth of experience in playing and he’s played under a lot of managers, so he would have picked up some good knowledge along the way," said Sampson.

"If he can pass that on to not only the players in our Academy but other coaches that he is going to be working with, that would be a real benefit to us and him."

Byfield is relishing the opportunity to develop his skills in football coaching and beyond.

"The great thing and the most exciting thing about this scheme is, I'm going to be reviewed," he said. "So I get to look back at the analysis - as I did when I used to play. What I liked, what I didn't like, how I got my message across.

"Communication is so important when I'm coaching. I always let the players know what they're doing it for, and if I don't like something on or off the pitch I always let them know as well.

"I definitely think I'll be out of my comfort zone but that's the reason why I'm so excited about doing this scheme. I want to improve and the more I get to understand and work and find out the best way for all age groups, all different personalities, it can only mean I'm improving as a coach, but more importantly as a person as well."

Part 1: Professional Player to Coach Scheme starts
Part 2: Pittman: Player to Coach Scheme will have a big impact
Part 3: Odhiambo: 'As a coach, I must still think like a player'
Part 4: Pitt: Returning to football has been huge for me
Part 5: Gilkes: Scheme shows commitment to black coaches
Part 6: Rahman: 'Coach scheme shows a drive to change the game'
Part 8: Lescott: Diversity helps to challenge and inspire players