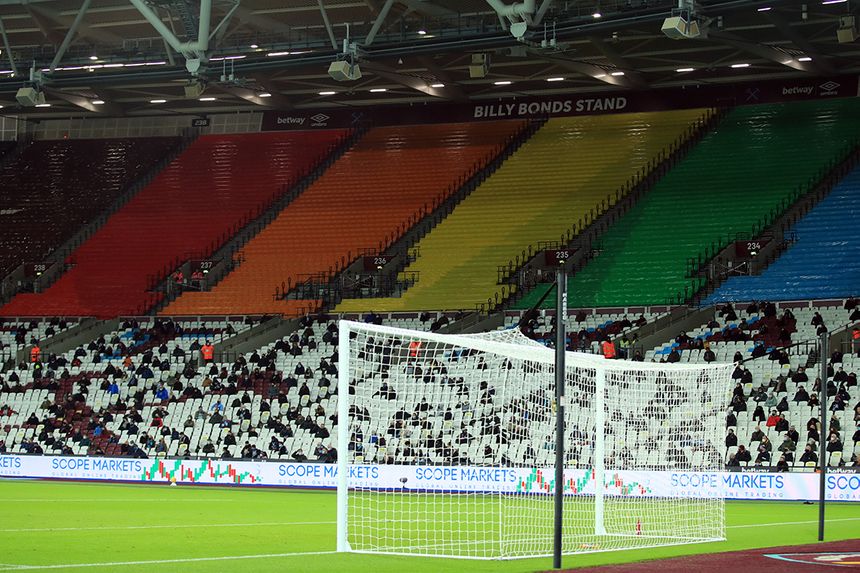 During the first two match rounds of December, the Premier League is proudly standing alongside Stonewall in promoting equality and diversity through the Rainbow Laces campaign.

The campaign kicked off at the weekend and, on Rainbow Laces Day, we look at how the clubs came together to show support for all lesbian, gay, bi and trans (LGBT+) people in football and beyond.

As part of the campaign, Rainbow Laces branding is visible at all the grounds on ball plinths, handshake and substitutes boards, while the LED perimeter boards at the stadiums are displaying the rainbow colours.

Some clubs, including West Ham United, pictured top, decorated their stands to offer another show of support.

Others, such as Burnley, had large banners adorned across their stands.

Manchester City, Tottenham Hotspur and Chelsea were among the clubs who used their big screens to offer support to the campaign.

Bespoke armbands for captains, rainbow shoe laces and pin badges for players, staff and management were also on display, as shown by Everton manager Carlo Ancelotti below.

The campaign is highlighting the importance of "allyship", with fans and athletes encouraged to become "active allies" and play their part in ensuring LGBT+ people feel included in sport too.

This is part of the work clubs are involved in all year round to celebrate and engage with their LGBT+ communities.

And the value of having key figures to back the campaign has been highlighted by Jordan Henderson.

The Liverpool captain has spoken with supporter Keith Spooner, who expressed how important a visible show of support was to him when he came out.

You’ll never walk alone Keith. If wearing the #RainbowLaces armband helps even just one person then it’s progress. Everyone is welcome at Liverpool Football Club. Hope you enjoyed the game tonight. #YNWA https://t.co/TfIhASribZ

The next phase of the partnership between the Premier League and Stonewall will continue to build on the work that has been undertaken since 2017 to set the benchmark for LGBT+ inclusivity in sport.

LGBT+ inclusion will also be a key element of player care and support programmes, which will be made available for all team age groups across Premier League clubs to ensure that football is a welcoming, inclusive environment for all.

Part 1: Stonewall partner reinforces PL commitment to equality
Part 2: Rainbow Blades bringing colour to Sheff Utd
Part 3: Premier League passion in the US: Katherine's story
Part 4: Spurs proud to show support for LGBT+ community
Part 5: Bellerin: I'm not afraid to support Gay Gooners
Part 6: 'We want LGBT+ inclusion woven in the fabric of football'
Part 8: Proud Baggies aiming to educate fans
Part 9: How Man Utd are creating a club for all
Part 10: Cahill: Everyone should be accepted for who they are
Part 11: Justin: It’s important to learn about LGBT issues