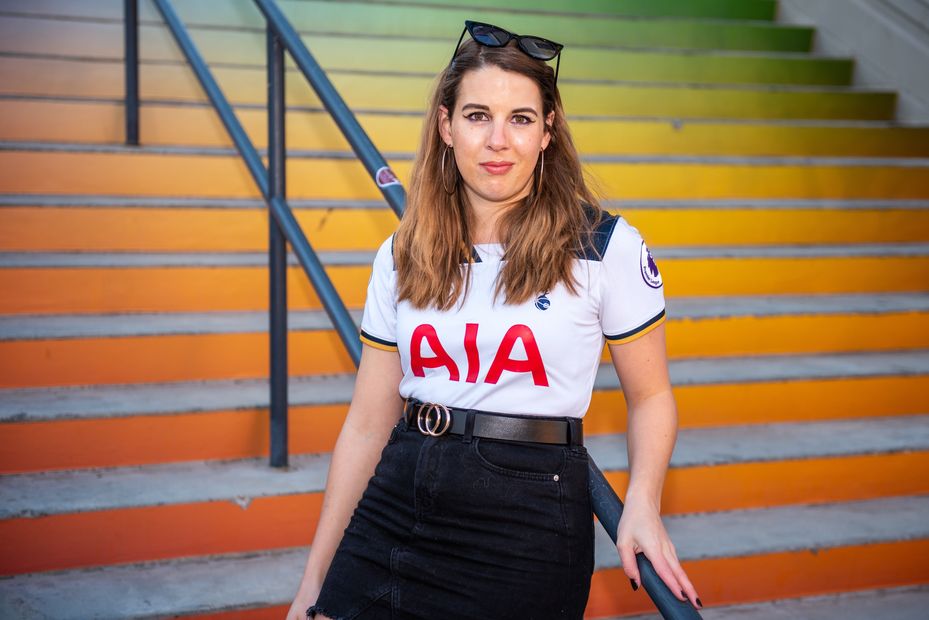 Meet Katherine, a die-hard Tottenham Hotspur fan in Salt Lake City and a leader of The Plastics, a group aiming to make soccer fandom more inclusive in the US.

“As a bisexual woman, we sometimes erase our own queer identities because we often don't feel queer enough for queer spaces and we don't feel straight enough to erase that identity entirely, too.

"Part of that for me is I never had a coming-out story. Funnily enough, it was a group of Arsenal supporters who really reached out to me.

"In high school, my brother was an Aston Villa fan and got really into the PL. So I watched a few games with him, but didn’t really have a team until he went away to college and one of our mutual best friends was a huge Spurs fan.

"He took me under his wing, and I feel like I picked them as my team because they are definitely underdogs. That’s how it started for me.

"I was in this space where I could be myself and accepted. I think it's maybe one of the first spaces in which I was fully out and felt comfortable saying, 'Oh yeah, well I'm bisexual.'"

"When I went to Chicago for grad school, I was like, 'I can’t watch these Spurs games alone. I need some form of human interaction.'

"I lived right down the street from the Globe Pub, the best soccer bar in the world, and I started going there. Through no fault of my own, I fell in with the Chicago Gooners.

"I was happy to sit in the corner with my beer and watch Harry Kane score goals on them all day, but the head of the Chicago Gooners is a really fantastic woman, and she brought me into the fold.

"I found a soccer community, and I was their token Spurs fan. We became really close friends, and I started feeling part of this community that wasn't even mine.

"I was in this space where I could be myself and accepted. I think it's maybe one of the first spaces in which I was fully out and felt comfortable saying, 'Oh yeah, well I'm bisexual.'

"I moved back to Salt Lake City in January, right before the pandemic, so engaging in a new community hasn’t really been possible.

"But one of the things I’m really looking forward to when it’s safe is to continue to create that kind of culture again.

"I’ve been following Proud Lilywhites on Twitter forever, and that was one of my very first exposures to queer supporters groups.

"I think it’s important, amazing, and I’d love to see more in the US.”