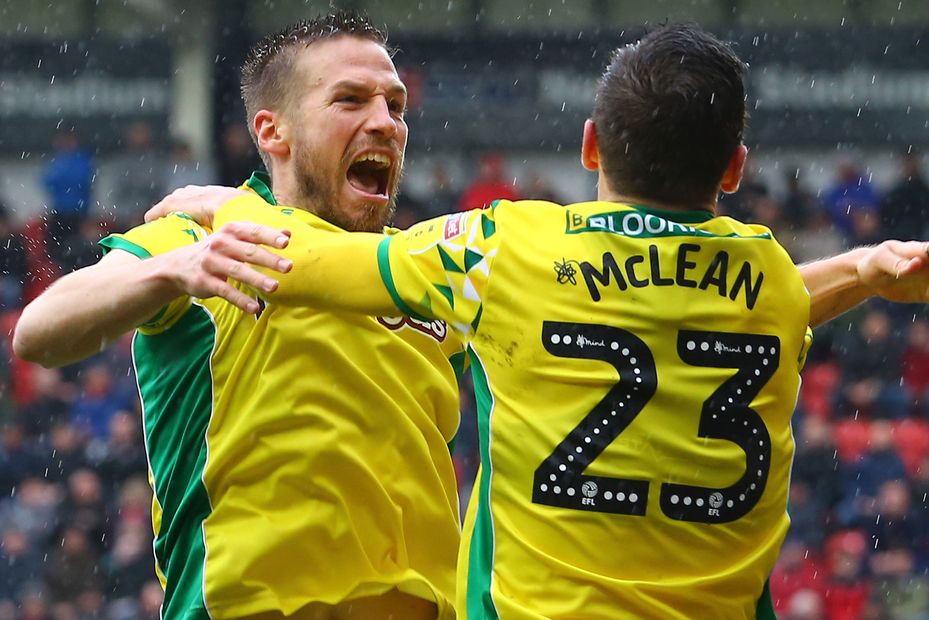 The Canaries developed a clear identity on their way to promotion, winning the Championship title with a confident, passing style.

Playing with an attacking mindset, sharp distribution and clever movement they won many admirers.

Norwich are unlikely to show a great deal of tactical variety this season.

In their promotion campaign they used a 4-2-3-1 formation in 43 of their 46 league matches, sticking with this shape from mid-September onwards.

In front of them, the preferred attacking midfield trio includes Cuban star Onel Hernandez on the left side, Emi Buendia on the right and Marco Stiepermann (pictured top left) operating as the No 10.

At the top of the pitch the mobile and predatory Finnish striker Teemu Pukki leads the line.

Passing with a swagger

Led by their affable manager Daniel Farke, Norwich are one of the most composed sides in possession to emerge from the Championship in recent years.

Their performance in a stunning 3-1 win at Leeds United showcased their prolific passing particularly well.

Moving the ball coolly in a hostile environment, Norwich picked off their hosts with great control.

The Canaries will expect to enjoy far less possession in the Premier League but, where possible, they would prefer to control matters, especially at their home stadium, Carrow Road.

Farke’s men are at their best when probing inside the opposition half. Their movement is excellent, as is their skill level, and their finishing is top class.

They consistently cut through teams last season, scoring an incredible 79 goals from open play, 21 more than their closest Championship rivals.

Norwich only failed to score in three of 46 contests during 2018/19 and should create problems for most Premier League teams.

The main area where they need to improve is at the back.

Seven Championship sides kept more than their 13 clean sheets, as a number of individual errors cost them goals throughout the campaign.

Dealing with crosses and set-pieces was a particular problem.

Almost 30 per cent of the goals Norwich conceded last term came from dead-ball situations, and many opponents deliberately set out to exploit this weakness.

Tim Krul is an experienced goalkeeper but will need to fare better at set-plays.

While Farke must seek to shore up his defence by adding quality in midfield and in the centre-back department, he has the basis of a team who can impress next season.

A little more tactical pragmatism will be required, but Norwich's positive brand of football will test opponents both home and away.

It will be fascinating to see if they can thrive in the Premier League without sacrificing the style that got them there.