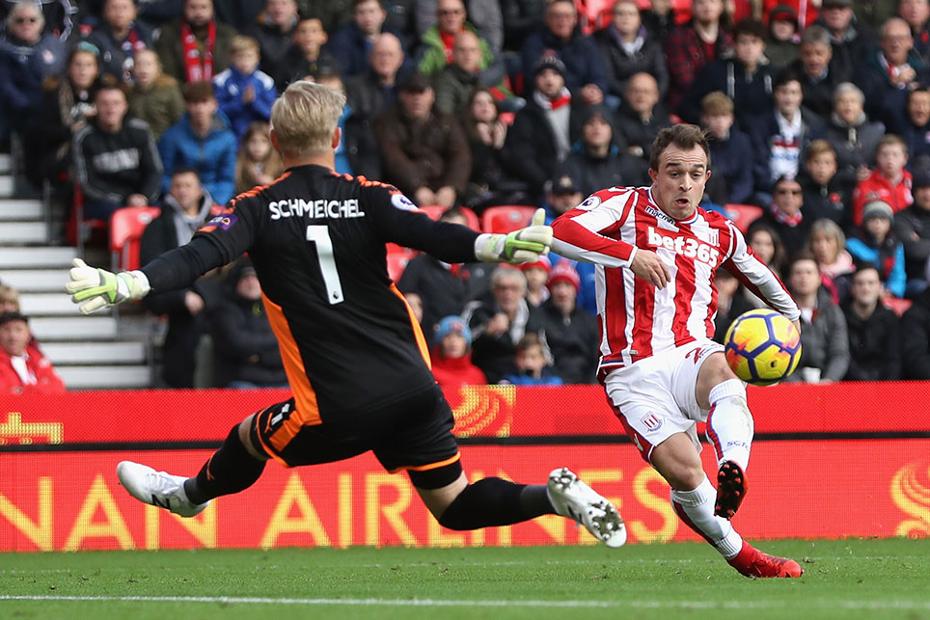 Stoke City’s quest to prolong their decade-long stay in the Premier League is about to get serious over the coming weeks and the continued good form of Xherdan Shaqiri will be integral to their hopes of survival, starting with the visit to Leicester City on Saturday.

The winger is by far the most creative player new head coach Paul Lambert has at his disposal.

Shaqiri may be playing for a side lying at the wrong end of the table, but he is still one of the most effective attacking midfielders in the division.

Leading scorer, leading assist-maker, and statistically top dog in all aspects of their productivity in the final third, Shaqiri is very much Stoke’s go-to guy.

In the absence of a top-class striker, this makes him invaluable.

Playing wide on the right, Shaqiri is a hard man to track. He will frequently hug the touchline, but also intermittently drift inside into pockets of space where he can cause maximum damage.

The 26-year-old is always willing to try an ambitious through-ball (he has made nine of Stoke’s 24) or fire off left-footed strikes of quality.

He is one of only eight PL stars to score three goals from outside the box this season, with only Phillippe Coutinho and Kevin De Bruyne topping his tally with four apiece.

Considering Shaqiri is playing for a team struggling to create opportunities, his end-product ranks him alongside some of the division’s top-performing forwards in 2017/18.

The Switzerland international has had more shots on target (26) than Roberto Firmino for example, which puts him 12th overall. Only five players have laid on more chances.

In spite of his club's results, Shaqiri is enjoying his most outstanding season in a Stoke shirt.

Steering clear of injury, he has played more minutes during this campaign than he has done previously, and boasts more shots on target and chances created than ever before.

Shaqiri has hit the target with 26 shots so far; a total he did not reach across his first two campaigns as a Potters player.

Whipping the majority of Stoke’s corners and free-kicks into the danger zone with a devilish left foot, the skilful playmaker is one of the most dangerous players in the division when standing over a dead ball.

No-one has created more goals from set-plays during 2017/18.

If Stoke do avoid relegation this season, they will be indebted to the enormous contribution of their gifted playmaker.

With a minimum of fuss Shaqiri has enjoyed a tremendously influential campaign.

Part 1: Ederson taking the last line of defence to a new level
Part 2: Dunk showing shades of Terry in his defence
Part 3: How Emre Can became heart of Liverpool's midfield
Part 5: Vardy showing no signs of slowing down