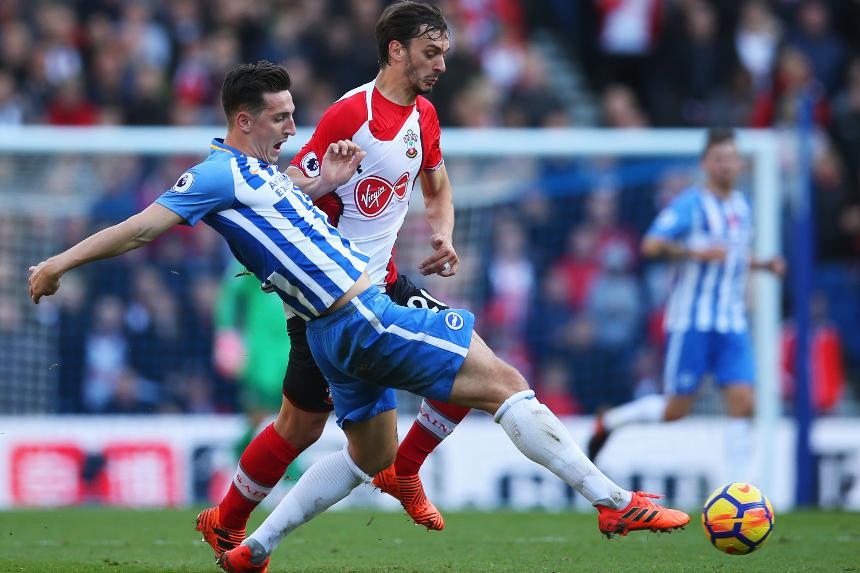 Lewis Dunk’s name was put up in lights last weekend after making one of the tackles of the season to deny Stoke City’s Charlie Adam a near-certain goal.

But Brighton & Hove Albion fans have been full of praise for their central defender all season.

In his debut Premier League campaign, the 26-year-old’s performance levels have been exceptional.

Good with his feet

Standing at just over 1.90 metres, Dunk cuts an imposing figure but his defending on the floor stands out more than his aerial prowess.

He likes to get tight to forwards when aggression is needed and has an excellent reading of the game.

He possesses a sense for danger and is often in the right place at the right time to thwart opponents.

Dunk is a natural at throwing his body in the way of goalbound shots and has produced a number of decisive blocks or last-ditch interventions, as he showed at the bet365 Stadium.

Of all the players in the Premier League, none has reclaimed possession inside the defensive third more often.

Chris Hughton’s side like dropping deep. They have spent 32% of their matches in their own defensive third, the most of any PL team.

Therefore they rely heavily on Dunk and his excellent partnership with Shane Duffy.

This tactical approach asks a lot of them, but the pair’s influence has been extremely positive. They are dogged and resolute.

Dunk grew up a boyhood Chelsea supporter and I believe there are elements of John Terry’s game in his make-up.

Anticipating play astutely and always eager to step in to win the ball, the graduate of Brighton’s Academy is similar to the former England captain.

And just like the Chelsea legend, he is also a fabulous distributor of long balls from back to front.

Hughton also sees the likeness with the Chelsea legend.

"There are similarities in the way John Terry was very much a mainstay in Chelsea’s team - Lewis Dunk is the same here," said the Brighton manager.

Confident at bypassing the midfield with long passes aimed at the chest or feet of Brighton’s forwards, Dunk has quality and composure on the ball.

Considering he had no Premier League experience heading into 2017/18, Dunk’s consistency has to mark him down as one of the success stories of the season.

He will face a number of stiff tests between now and May as he looks to help Brighton preserve their top-flight status.

But Dunk has proved that he belongs at this level.

Part 1: Ederson taking the last line of defence to a new level
Part 3: How Emre Can became heart of Liverpool's midfield
Part 4: Shaqiri can shake things up for Stoke
Part 5: Vardy showing no signs of slowing down