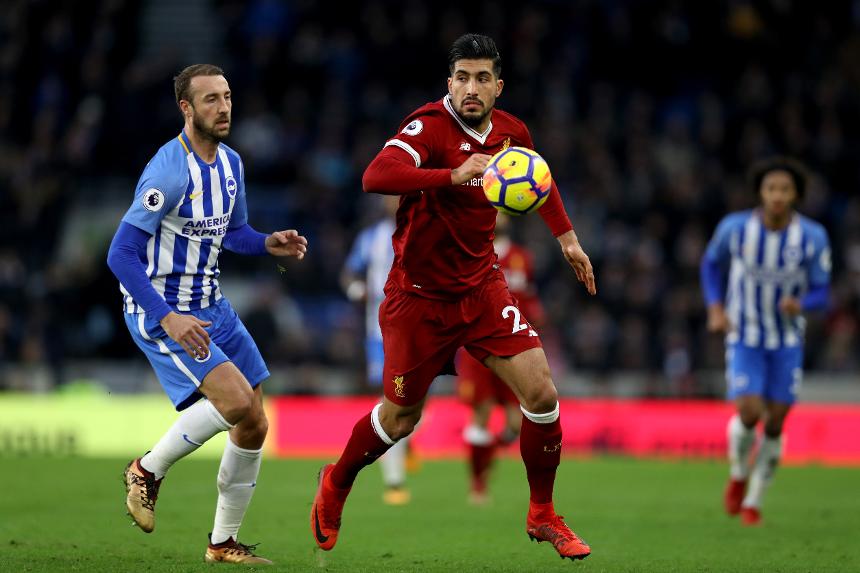 Exclusive video: Behind the scenes with LFC in Marbella External Link

A number of his Liverpool team-mates have hogged the headlines through their eye-catching exploits this term, but the influence of Emre Can on Jurgen Klopp’s side should not be ignored.

The German has shown major improvement during 2017/18 and his powerful all-action game has become integral to the way Liverpool perform.

Above all else, Can’s ball-winning skills have come on immeasurably.

The defensive midfielder has won 47 tackles this season, the same number as he managed in 2016/17 but in 10 fewer appearances.

His tackle success rate is 81.03 per cent, an increase of almost 10 percentage points.

Statistically he is the most proficient tackler among central midfielders in the Premier League.

Winning 47 of 58 tackles, the only players with a higher success rate are six defenders and three forward players.

Liverpool are also benefitting from a more mature Can this season.

Now 24, he has learnt to channel his energy and enthusiasm in a far calmer way.

This change is reflected in the way he now restrains himself from giving away cheap fouls in bad areas.

Last season he committed an incredible 70 fouls, the second highest in the top flight behind Christian Benteke.

Too often his recklessness allowed opponents to put dangerous free-kicks into the box.

Making just 24 fouls this season, only one more than he has received, Can’s improved discipline has had a very positive effect on the Liverpool team.

No longer are they forced to defend as many needless set-pieces.

The German’s timing and decision-making has been markedly better.

In possession Can is also taking more care and attention.

In the past he has perhaps been guilty of holding on to the ball too long, trying too many ambitious passes, or being generally wasteful.

You cannot level those accusations at his door this season.

Physically strong and intelligent in the way that he presses, the tenacious Can is now Liverpool’s top ball-winner.

During this campaign he has won the most tackles, regained possession in the middle third more than any team-mate, and he also leads the way for Liverpool for duels won and ball recoveries too.

As the best defender in Klopp’s midfield trio, Can’s role is clearly defined.

His job is to work hard, win the ball back, and give it to a colleague without fuss.

Spreading his distribution around the pitch, going sideways, backwards and forwards in fairly equal measure, he does a fine job of keeping Liverpool ticking over.

In the past Can was regarded as a handy utility player, but those days are behind him.

In a regular central midfield role that suits his strengths, there are very few more productive performers in English football’s top flight.

Part 1: Ederson taking the last line of defence to a new level
Part 2: Dunk showing shades of Terry in his defence
Part 4: Shaqiri can shake things up for Stoke
Part 5: Vardy showing no signs of slowing down