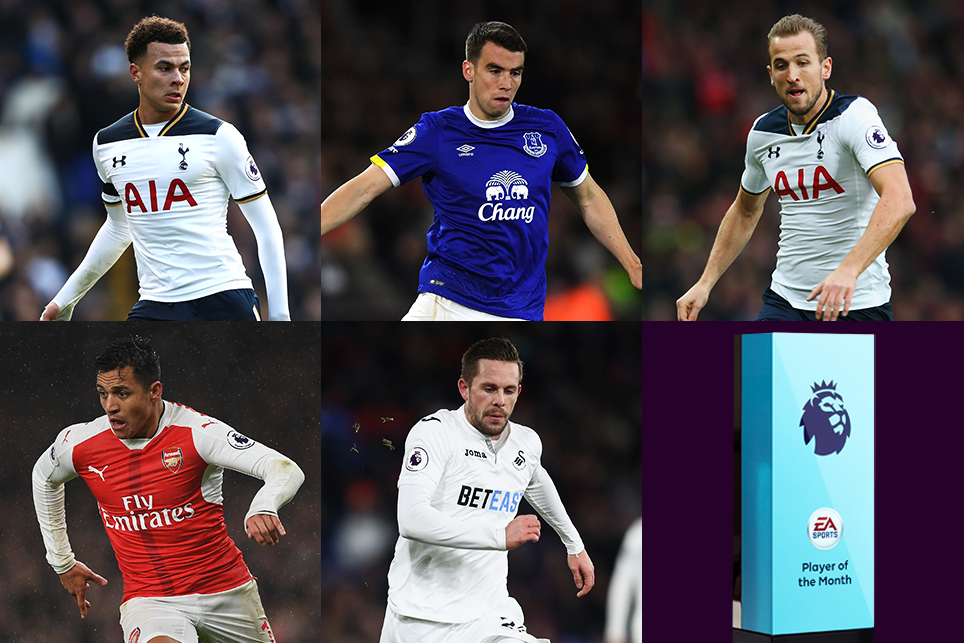 Spurs' Kane and Alli are against Arsenal's Sanchez, Everton's Coleman and Swansea's Sigurdsson for January award

Five players who stood out in January for their Premier League clubs have been nominated for the EA SPORTS Player of the Month award.

Do Harry Kane's five goals beat the five scored by his Tottenham Hotspur team-mate Dele Alli? Or do the talismanic qualities of Alexis Sanchez deserve to be recognised?

Are Seamus Coleman's displays at the back for Everton last month a worthy winner or should Gylfi Sigurdsson's winning strikes for Swansea City count for more?

You can help decide who wins by voting below*. You have until 23.59pm on Monday 6 February to decide.

P3 W3 D0 L0 G1 A1 CS3
That Everton enjoyed a 100% record in January with no goals conceded is in part thanks to their right-back, who struck the late winner at Crystal Palace and provided an assist.

P5 W3 D1 L1 G3 A2
The Arsenal forward's three goals included the one that started the remarkable fightback at AFC Bournemouth and the stoppage-time penalty to beat Burnley.

P4 W3 D0 L1 G2 A2
The Swansea revival under Paul Clement has been spurred by the Iceland international, who struck the winning goals at Anfield and against Southampton.

The winner will be revealed on Friday, 10 February.

*The public vote will count for 10% of the total vote.