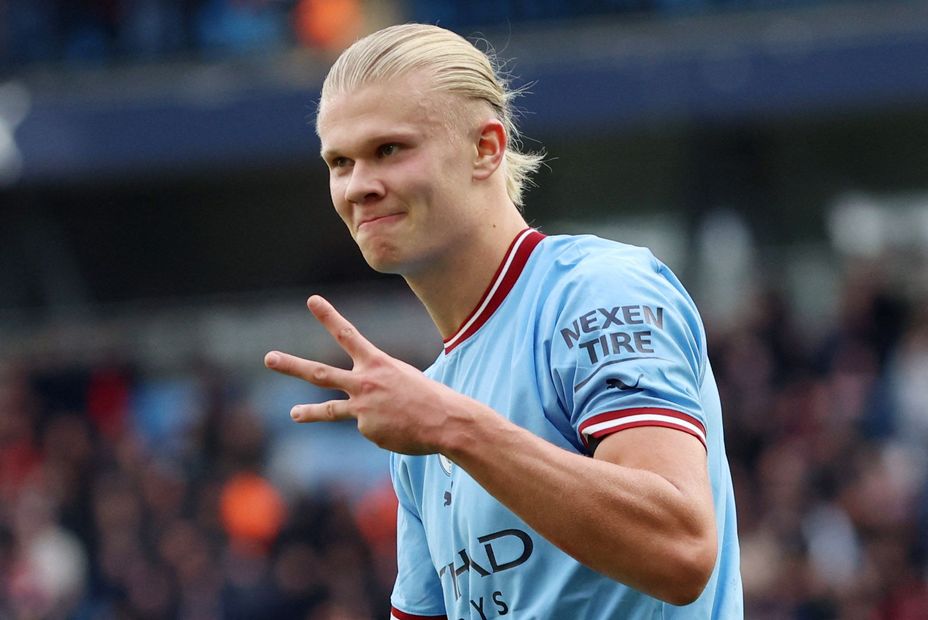 Erling Haaland (£12.1m) did not feel the pressure as the most popular player in Fantasy Premier League history, nor as the most-captained player for the fifth successive Gameweek as he starred in the Manchester derby.

The Norwegian was owned by an unprecedented 8,548,463 managers, of whom over 5.6million handed him the armband, and their choices were rewarded as Haaland scored a hat-trick, with two assists and maximum bonus to deliver them 23 points after Manchester City's  6-3 win over Manchester United on Sunday.

Haaland's 23 points is the highest total in a Gameweek this season, beating the 22 of Roberto Firmino (£7.9m) in GW4.

An additional +40,000 managers entrusted the Norwegian with their Triple Captain chip, of which more than 7,000 were Man Utd fans.

Mohamed Salah (£12.8m) took second spot in the captaincy stakes, with 1.3m+ backing him to extend his excellent record against Brighton & Hove Albion and the Egyptian registered an assist in the thrilling 3-3 draw at Anfield, making it 83 points in 11 appearances when facing the Seagulls.

Gabriel Jesus (£8.0m) rewarded the 779,000+ who handed him the armband by scoring in Arsenal's 3-1 win over Tottenham Hotspur and claiming two bonus points.

But with Jesus sitting precariously on four yellow cards, one from a suspension, he was also the most-sold player ahead of Gameweek 9. Over 520,000 managers will be wishing they had kept faith with the Gunners' forward who avoided getting a fifth yellow in the derby win.

There were no regrets among the 420,000+ who parted company with Dejan Kulusevski (£8.0m). The Swede was ruled out with a hamstring injury.

Those who ditched Kulusevski's compatriot Alexander Isak (£7.0m) did not rue their decision either. A leg injury meant the forward missed Newcastle United's 4-1 win at Fulham.

*Before bonus points are added

That faith was repaid as Maddison starred in Leicester City's 4-0 win over Nottingham Forest, scoring two goals and producing one assist, meaning he has now registered seven attacking returns this season. Leicester's next four matches score just two in the Fixture Difficulty Ratings (FDR), making him an extremely appealing option.

Wilfried Zaha (£7.3m) was picked up by more than 405,000 new owners ahead of a favourable run of fixtures for Crystal Palace until the FIFA World Cup, but was unable to add to his four goals as the Eagles lost 2-1 at home to Chelsea.