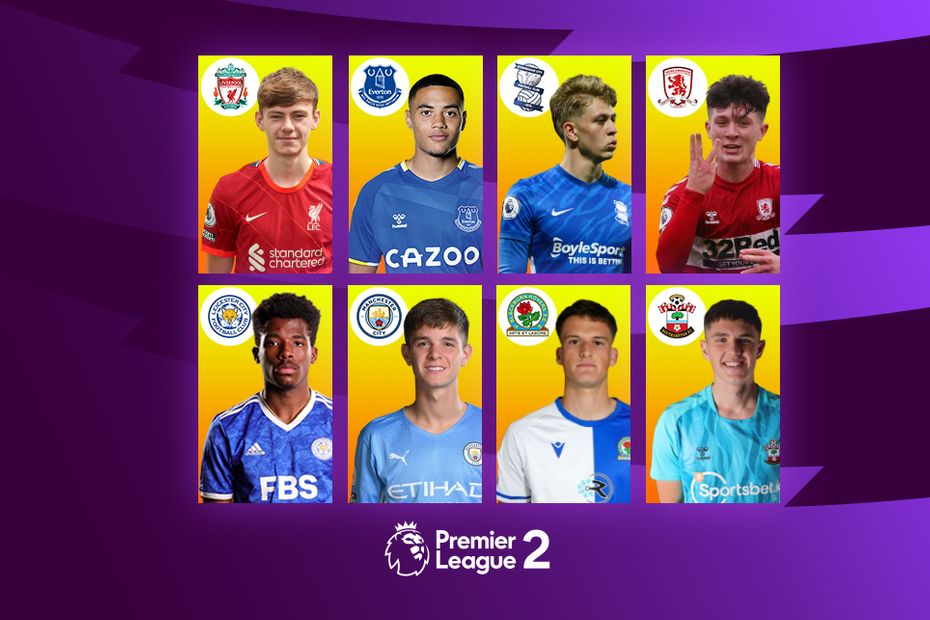 Eight Under-23 players have been recognised for standout performances with nominations for January 2022's Premier League 2 Player of the Month award.

The shortlist was selected by the Premier League's Football Development Panel after PL2 club coaches nominated the best performance by an opposing player in each of their league matches in the month. The Panel will also pick the winner, who will be announced next week.

The 18-year-old was a key figure in defence for Liverpool, playing in two PL2 Division 1 matches. The Reds drew 1-1 with Everton before ending the month with a 2-0 win at Crystal Palace. He also played all 90 minutes in the first team's 4-1 FA Cup victory over Shrewsbury Town and provided an assist.

Nineteen-year-old Dobbin scored once in two PL2 Division 1 appearances, netting the winner in a 1-0 win at home to Tottenham Hotspur. He also played the full 90 minutes as Everton came from behind to draw at Liverpool. The striker also came on in extra-time as Everton won 3-2 at Hull City in the FA Cup and earned a place on the bench for the Toffees' Premier League matches against Brighton & Hove Albion and Aston Villa.

The forward 19, enjoyed a productive month for Birmingham City, scoring three goals in four appearances and assisting once. He came on as a substitute against Burnley and Stoke City, creating the opening goal against the latter. The Spaniard then scored twice in a 3-2 success at home to West Bromwich Albion, before netting in a 3-1 defeat to Fulham in his final match for the Blues before leaving for Italian side Monza.

It was a prolific month for the striker, 18, who netted five times in three Division 2 matches and a further two in a 5-0 Premier League Cup triumph at Queens Park Rangers. Kavanagh, who has since joined League Two side Harrogate Town on loan, struck twice in a 2-1 win at Villa, before getting a hat-trick in a 3-2 home victory over Sunderland.

The 19-year-old Portuguese midfielder produced two goals, both late winners for Leicester City, and an assist in January. He set up the equaliser before clinching the 2-1 success against Brighton, and then scored the decisive goal as they won at West Ham United by the same scoreline. He also played 45 minutes as a second-half substitute in a 4-1 FA Cup win against Watford.

McAtee, 19, played three matches for the Division 1 leaders in January and scored in all of them. The midfielder netted and assisted twice in a 5-3 success at Blackburn Rovers before putting Manchester City ahead in a 3-1 win over Manchester United. He then struck the only goal of the match at Chelsea. The midfielder also came on in a 4-1 FA Cup third round victory at Swindon Town and was an unused substitute in all three Premier League matches.

The 20-year-old forward began January with an assist in a 5-3 defeat to Manchester City, before ending the month by being involved in all four goals of a 4-0 home win over Leeds United, netting a hat-trick and creating the second.

The 19-year-old goalkeeper played in both January matches for Southampton, making 11 saves as he helped his side to home victories against Division 2 leaders Fulham and then Middlesbrough. His stops included a crucial penalty save against the latter in a 1-0 win. Wright also made two appearances in the PL Cup against West Bromwich Albion and AFC Bournemouth.