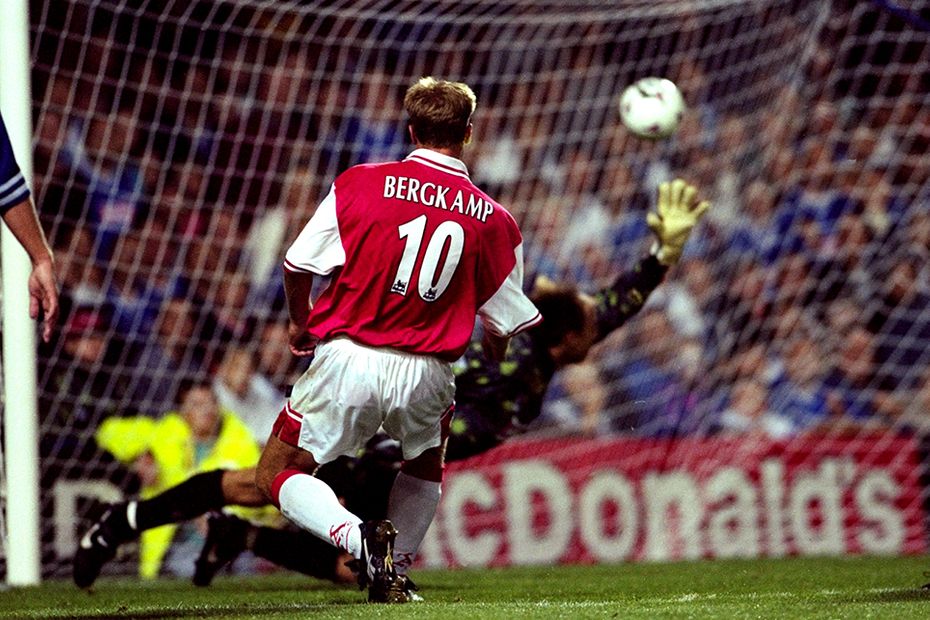 Many of Dennis Bergkamp's 87 goals in the Premier League were spectacular, but the Dutchman says one stands out above them all, and it is not the one for which he is most famous.

"A lot of people would pick my goal against Newcastle [United, in March 2002]," said the Arsenal legend as he was inducted into the Premier League Hall of Fame. "However, my favourite is the third goal of my hat-trick against Leicester [City] in 1997.

"The run, control, touch and finish all needed to be done at high quality and pace. It was a goal where every move went how I’d planned it in my head."

The goal also made Bergkamp the first Dutchman to score a hat-trick in the Premier League and was one of many moments that helped to earn him a place in the Hall of Fame, the League's highest individual honour.

His favourite Premier League match also came against Leicester, as Arsenal won 2-1 to finish the 2003/04 season without defeat for the club's third PL title.

"Looking back there have been a lot of great matches," he said. "If I had to pick one out, it would have to be the last game in the 2003/04 season.

"Beating Leicester meant we had gone the whole season unbeaten in the Premier League. An unbelievable achievement and I am proud to have been part of it."

The Dutchman, who was one of the competition's early star signings from overseas when he joined Arsenal in 1995, is one of six former players from a 23-man shortlist to gain the most combined votes from the public and the Premier League Panel to earn a place in the Hall of Fame.

"I’m extremely proud if people say I was one of the first foreign players who added something to the English game," he said. "The Premier League most definitely made me a better player.

"From the moment I arrived in England I’ve embraced the English mentality and passion for football, it suited me and my style of play.

"Playing every game against good and tough opponents meant I improved all the time. I’ve enjoyed every minute of it."

Follow @premierleague and #PLHallOfFame on social media for news of the final two inductees for 2021 to be announced tomorrow.