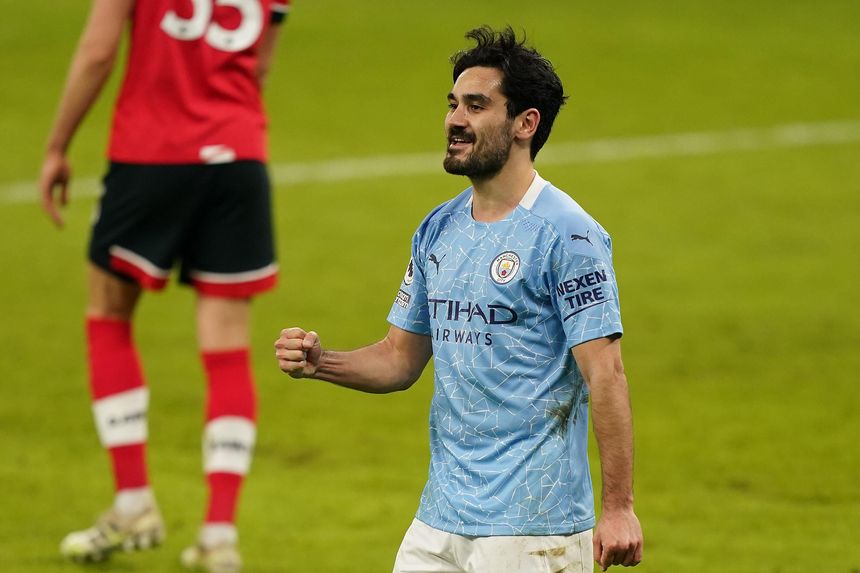 They had to wait until the final match of the Gameweek but more than a million managers were rewarded for captaining Ilkay Gundogan (£6.2m) in Fantasy Premier League.

For the first time in his career Gundogan was the most-captained player in the game, and he justified that faith with a goal in the second match of Manchester City's Double Gameweek 27.

SCOUT: Ilkay Gundogan is now the best-value #FPL midfielder of 2020/21 based on points per million#FPL #MCISOU pic.twitter.com/0JfLBO4Iej

Gundogan's strike in the 5-2 win over Southampton came as a relief to his backers after the German blanked in the 2-0 derby defeat by Manchester United.

Bruno Fernandes (£11.5m) was the star of that match as he rewarded his army of backers and punished those who sold him.

The Portuguese, who claimed 10 points, was the second-most captained player in Gameweek 27, with more than 875,000 managers benefiting from his early penalty at the Etihad Stadium.

But he was also the third-most sold, with 331,000+ managers opting to transfer him out after blanking in back-to-back 0-0 draws in Double Gameweek 26.

Mohamed Salah (£12.5m) completed the top three captain picks. But he followed a blank in Double Gameweek 26 with further frustration as he claimed two points in Liverpool's 1-0 home defeat against Fulham.

Harvey Barnes (£6.8m) and James Maddison (£7.2m) were the most-sold players ahead of the Gameweek deadline.

A combined 1.4million managers parted company with the Leicester City pair after injuries ruled them out of their 2-1 victory at Brighton & Hove Albion.

And more than 331,000 managers shipped out Fernandes as the fixtures toughen up for Man Utd. Only one of their next nine matches score two in the Fixture Difficulty Ratings.

Gundogan was also the most-popular captain among the leading 100 FPL managers.

Their thinking paid off as Kane returned 19 points thanks to two goals and two assists in Tottenham Hotspur's 4-1 victory over Crystal Palace on Sunday.

De Bruyne blanked against Man Utd but scored twice against Southampton, his first goals since Gameweek 17.

Jesse Lingard (£6.1m) was the top transfer target for Fantasy managers, gaining 459,000+ new owners, and the midfielder rewarded his backers with a goal against Leeds United.

In his six appearances since joining West Ham United on loan he's averaged 7.3 points per match.

The second most-bought player was Mason Mount (£7.0m). The Chelsea midfielder has established himself under Thomas Tuchel, starting the last seven matches and scoring three goals over that period.

However, Mount was dropped for the 2-0 victory over Everton on Monday.

More than 364,000 managers benefited from De Bruyne's brace on Wednesday.