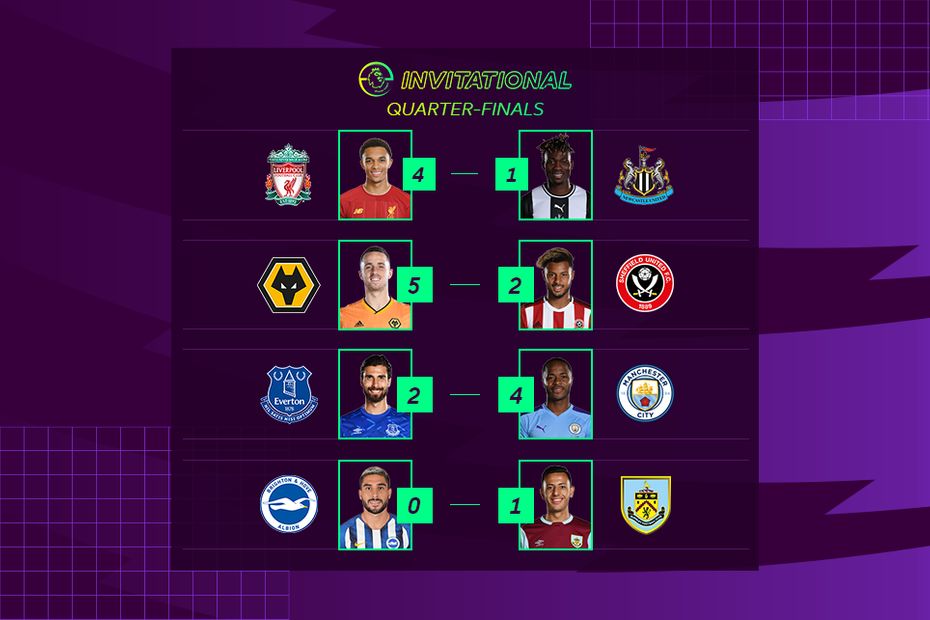 The line-up for the ePremier League Invitational semi-finals has been confirmed, with Liverpool's Trent Alexander-Arnold setting up a last-four showdown with Manchester City's Raheem Sterling.

Alexander-Arnold triumphed 4-1 against Newcastle United winger Christian Atsu in the opening tie of Day 4 in the EA SPORTS FIFA 20 tournament.

Sterling produced a couple of team goals that first-team manager Pep Guardiola would have been proud of as he won 4-2 in a thrilling contest against Everton's Andre Gomes.

⚡️ The best moments from a day of #ePremierLeague Invitational quarter-finals actionhttps://t.co/TaqWIdSnd9

A double from Leonardo Campana helped Diogo Jota battle past Sheffield United's Lys Mousset. The Wolverhampton Wanderers forward's own character wrapped up the 5-2 win with a sublime chip.

He will face Dwight McNeil of Burnley, who needed a Golden Goal to beat Brighton & Hove Albion striker Neal Maupay.

After the first 90 minutes finished 0-0, McNeil claimed a dramatic victory with a strike from Jay Rodriguez.

Sky Sports will also be airing the semi-finals and final in the UK on Sky Sports Main Event/Premier League, as well as on YouTube and Twitch.

We would also ask anyone inspired to play FIFA 20 to take regular breaks from gaming every 45 minutes.