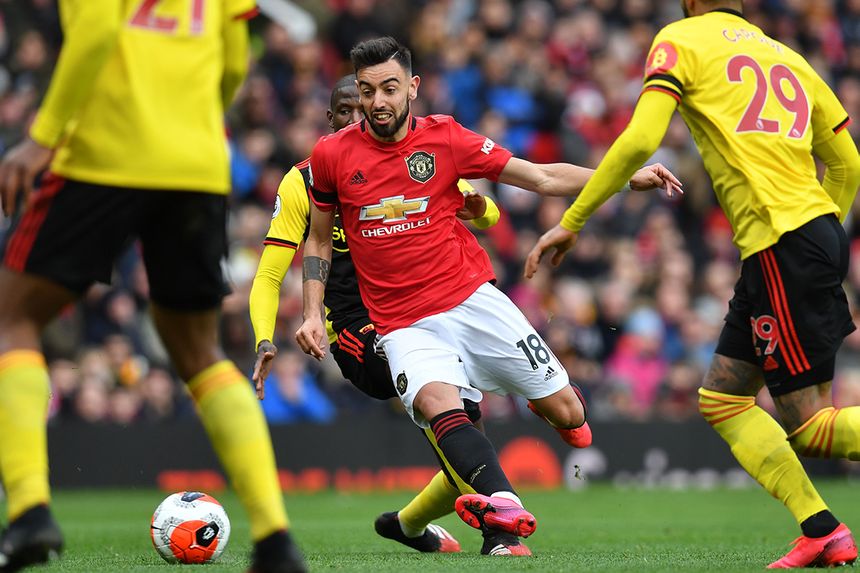 What Bruno's first goal meant to him External Link

The Manchester United midfielder is the most-bought player ahead of Friday’s 19:00 GMT deadline, earning more than 102,000 new owners so far for the trip to Everton.

Fernandes scored once and provided an assist in the home win over Watford on Sunday, claiming 14 points.

He has 22 points in his three Gameweek appearances since arriving in the January transfer window.

Fernandes looks among the standout options for managers attempting to navigate Gameweek 28, when four sides are without a fixture.

Manchester City's EFL Cup final with Aston Villa means that both sides, along with Arsenal and Sheffield United, will blank.

Among among those affected are Kevin De Bruyne (£10.8m) and Jack Grealish (£6.7m), two of the three most popular midfielders in the game.

Fernandes’s dominance of set-pieces is another big factor in his favour.

He converted a penalty for United's opener against Nigel Pearson’s side and the 25-year-old also appears to be their first-choice taker for corners and free-kicks.

His 10 shots and seven chances created over the last three Gameweeks are both team-leading totals.

This suggests he can offer a strong all-round option for Gameweek 28 and, indeed, the rest of the 2019/20 season.

Holly Shand (@FFCommunity_): Fernandes looks to be the real deal and, crucially, he has penalties. I'm also hopeful that Dominic Calvert-Lewin (£6.2m) can deliver in the same fixture.

Lee Bonfield (@FPLFamily): Still at 35 per cent ownership, Jamie Vardy (£9.7m) can hardly be called a differential but FPL managers have been selling him in their droves given the distinct lack of goals since Gameweek 18. But we saw the green shoots of recovery against Man City at the weekend. Norwich City should come out and attack Leicester City at Carrow Road, leaving space for Vardy to do what he does best.

Sam Bonfield (@FPLFamily): I've held Vardy all this time for his Gameweek 28 fixture. The reduced Gameweek means the big-hitters left with fixtures have to perform. Vardy has consistently been one of the most transferred-out players but could be an excellent asset this weekend when I expect his scoring boots to be back on.

Paul Gee (@FPLPaulGee): I bought Matt Doherty (£6.1m) last week. Wolverhampton Wanderers have tightened up at the back and Doherty is worth the extra outlay for his attacking threat. Leicester have a great fixture this week against a Norwich side fighting relegation. I expect Vardy to start scoring again.