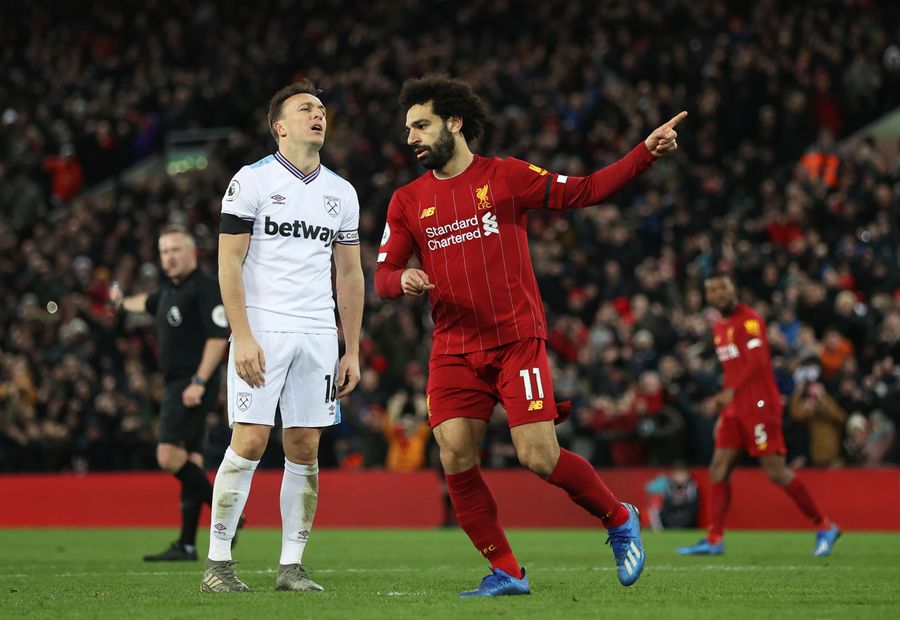 After being selected by a season-high 2.18million Fantasy Premier League managers for the captain's armband, Mohamed Salah (£12.8m) rewarded his backers with a goal against West Ham United.

The Egyptian was the most-popular selection for the third successive Gameweek and delivered seven FPL points to make it 40 over his last four matches.

Sadio Mane (£12.3m) joined Salah among the top three captain picks after emerging from the bench to net the score the only goal at Norwich City in Gameweek 26.

The Senegalese netted the winner against the Hammers on Monday night to outscore his team-mate by a single point.

With 586,000+ backers, Sergio Aguero (£12.0m) pipped Mane to second in the captaincy stakes but the Argentinian disappointed his managers with zero points at Leicester City, missing a penalty before being substituted off.

Liverpool's Salah and Mane were the leading picks among the top 100 FPL managers, who preferred Raul Jimenez (£7.9m) to Aguero in third.

The Wolverhampton Wanderers striker scored in their 3-0 victory over Norwich on Sunday but he picked up a yellow card to reduce his haul to five points.

Alongside Jimenez and Mane, Danny Ings (£7.1m) was the most transferred-in player ahead of the Gameweek 27 deadline.

All three benefited from appealing home matches against teams rated at two in the Fixture Difficulty Ratings (FDR) but Ings could not add to his 15 goals this season as Southampton beat Aston Villa 2-0.

While Kelly was named in Crystal Palace's squad on Saturday, having recovered from his calf strain, he was fit enough only for the bench and did not appear in the 1-0 win over Newcastle United.

Vardy lost another 263,000 owners ahead of the visit of Manchester City, where his shot hitting a post was the closest he came to ending his goal drought since Gameweek 18.