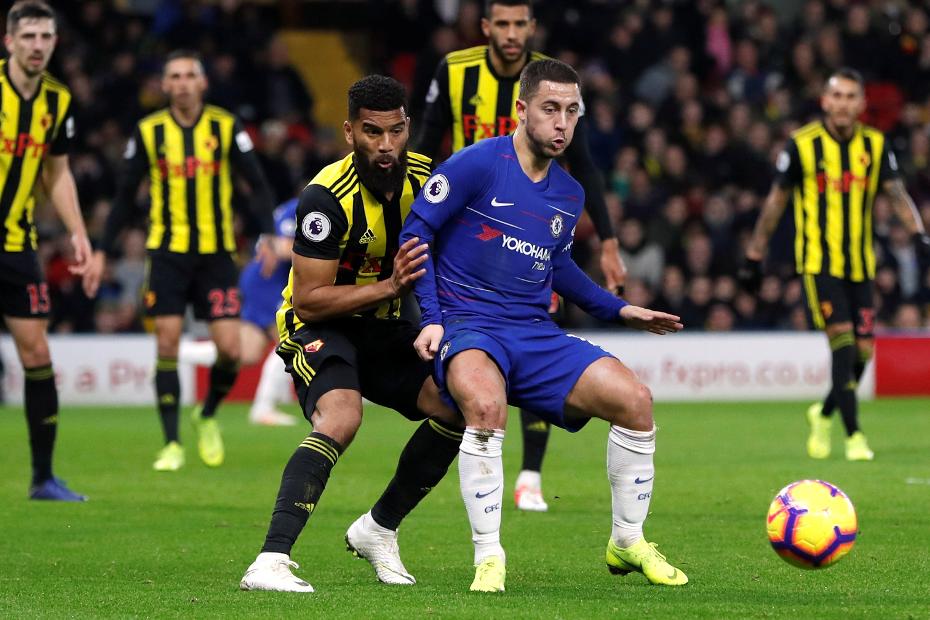 It is an interesting change of tactical direction for a team who have traditionally favoured a target man up front.

During his spell at Napoli, Sarri converted diminutive winger Dries Mertens into a prolific striker.

So on the back of matchwinning contributions from Hazard against Manchester City, Brighton & Hove Albion and Watford in this new role, Sarri will be optimistic he can replicate a similar positive switch at Stamford Bridge.

The upsides of Hazard switch

Placing Hazard on the shoulder of the last defender has several advantages.

The Belgian's bright movement, eye for space and acceleration will provide Chelsea's attack with more energy.

We saw this when he sprinted beyond his markers to score from a 1v1 situation at Watford and earn a penalty in the same match.

At Brighton, Hazard was also fastest to react to a turnover and left the Seagulls defenders in his wake to apply another cool finish.

Even if he is not enjoying as many touches of the ball or creating as many chances, Hazard’s end product has increased at centre-forward.

There are other upsides to using Hazard as the main striker.

Roaming in a more advanced role, he loves to show for the ball in the final third and link play with his team-mates.

These spells of lengthy possession help Chelsea to wear down opponents.

The other benefit of this tactical change is the opportunity it affords Sarri to start Pedro and Willian in wide areas.

Together these two are industrious and make Chelsea more solid without the ball.

This is one of the main reasons Hazard was "a false nine" in the 2-0 home win over Man City.

If Hazard starts up top at home to Newcastle United, Chelsea will lack the aerial threat of Giroud or Morata.

Attacking crosses is not the diminutive Hazard's forte. This was demonstrated when he spurned golden opportunities from crosses flashed across the six-yard area against Brighton and Watford.

Chelsea’s wingers have shown a reluctance to whip balls into the area without Morata or Giroud there to attack them.

They only attempted a combined total of 16 open-play crosses against City, Brighton and Watford, a figure way down on their season average of 12.1 per 90 minutes.

They did change against Leicester City, sending over an incredible 24 crosses.

But, rather tellingly, not one succeeded in reaching its target in the 1-0 defeat at Stamford Bridge.

Change for the better

There are pros and cons to using Hazard as a lone striker but, given how well he seems to be adapting, it is an experiment worth persisting with.

The skilful No 10 is Chelsea’s greatest goal threat and appears to be warming to his role as the spearhead of the side.

Tomorrow: Rice on a level with Torreira