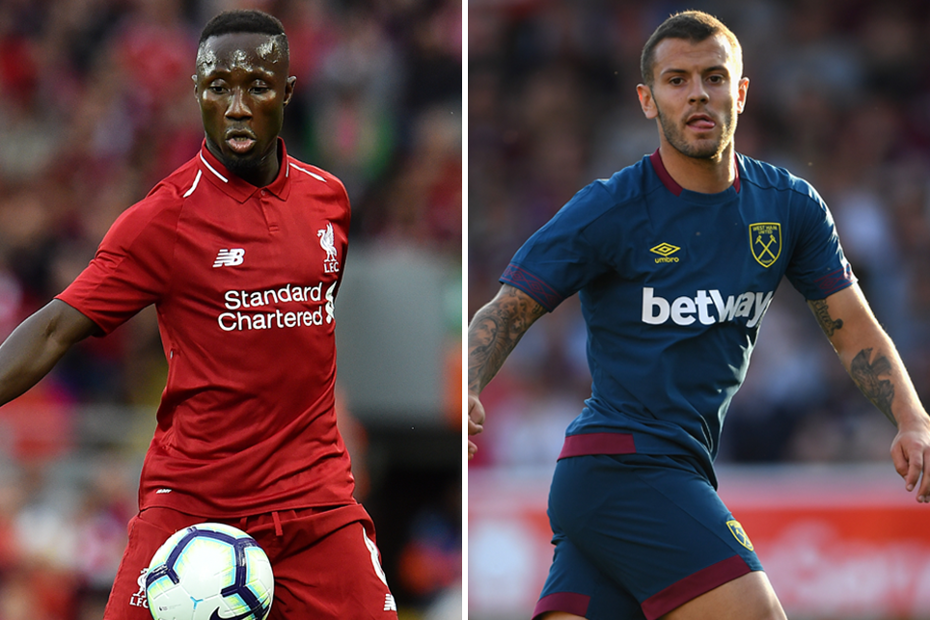 There will be fascinating match-ups all over the pitch when Liverpool host a new-look West Ham United on Sunday.

But a midfield duel between two debutants, Naby Keita and Jack Wilshere, is the pick of the bunch.

Both are capable of starring as the deepest-lying midfielder, in a box-to-box role or tucked in just behind the strikers.

Both are bright on the ball, can beat opponents with quick feet, are aggressive and are eager to dictate matches with their footballing brains.

It is expected that 23-year-old Keita will initially feature as one of Jurgen Klopp’s central attacking midfielders.

His fellow new boy Fabinho will take up a defensive midfield spot, with one of Giorginio Wijnaldum, James Milner, Adam Lallana or Jordan Henderson joining Keita in a three-man unit.

With the injured Alex Oxlade-Chamberlain missing, Keita's athleticism and dribbling skills will fill an important void for Liverpool in the central and forward zones.

Oxlade-Chamberlain’s driving runs from deep gave the Reds a fabulous new dimension last term. Like "the Ox" and Wilshere, Keita is a central midfielder who can travel beautifully with the ball.

Wilshere will be reminded of the value of keeping the ball at West Ham United.

Even though the new manager Manuel Pellegrini wants to turn the Hammers into a more possession-based side, they will spend long periods chasing the ball in challenging tests like at Anfield.

Wilshere’s defensive skills will be put to the test, and it is an area of his game that he can improve this season.

He is not at the same level as Keita, who has terrific ball-winning qualities.

Wilshere’s accurate use of the ball will help West Ham, though.

His accurate distribution can help alleviate pressure on Sunday, giving his defenders a welcome breather.

Contributions per 90 mins in league

If Wilshere’s main job this weekend is to help take the sting out of Liverpool’s play, Keita will be handed a more ambitious brief.

He will be eager to push into the box, and is clever in his decision-making. Keita's ability to open up defences with passes will be a huge boost for Roberto Firmino, Sadio Mane and Mohamed Salah.

While these players will have contrasting instructions from their managers, they are two exciting all-round midfielders of a similar ilk that should improve their new teams.