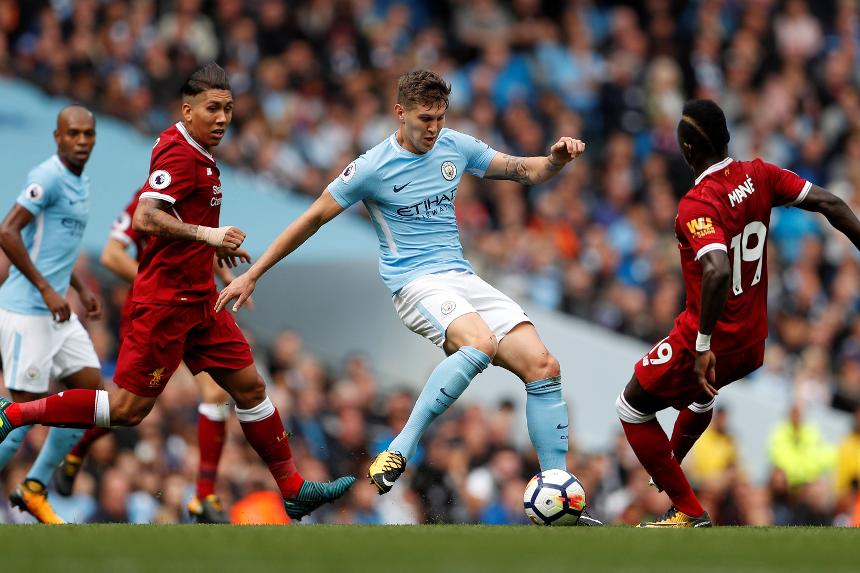 From a tactical perspective Liverpool have the tools to become the first Premier League side this season to beat Manchester City.

To date Pep Guardiola's leaders have been nothing short of magnificent away from home, racking up 31 points from a possible 33 and conceding only five goals.

But on Sunday their fluid possession-based philosophy will be severely put to the test.

For the in-form Liverpool side who face them can press more effectively inside the middle and attacking thirds than anyone else in the competition.

As well as an athletic midfield, Jurgen Klopp also has a front three who are accustomed to working hard to retrieve the ball.

For example, forward Roberto Firmino has won possession back 58 times inside the middle and attacking pitch zones.

So provided they play in the same manner we usually see from Liverpool at Anfield, City will find it harder to play through the lines from back to front.

If mistakes are made, Firmino, Sadio Mane and Mohamed Salah, if fit, can be deadly from turnovers.

How to hurt Man City

No team have yet found the right formula to beat Man City, but if there are chinks in their armoury it is when members of their back four are put under pressure.

When you study some of the rare problems they have experienced away from Etihad Stadium, it is clear that pace and the presence of extra bodies inside the area can unsettle them.

Jay Rodriguez sprinted in behind a square back line to score for West Bromwich Albion this season, and later in the same match City defender Nicolas Otamendi made an error when put under pressure by Matt Phillips inside the six-yard box.

At Manchester United, Otamendi and Fabian Delph made mistakes when Marcus Rashford ran on to a quickly played diagonal pass.

On that occasion both defenders were rushed into a miscalculation.

And in their last away contest, at Crystal Palace, Wilfried Zaha's speed and trickery forced poor decisions from Danilo and Raheem Sterling when conceding a penalty.

Zaha could also have had an assist for Andros Townsend, who blazed over a low cross when five Palace men had loaded the box.

To create chances against City being brave is imperative.

That means making forward runs in beyond Guardiola's defenders and pushing extra players into the danger areas when opportunities to attack occur.

When under pressure, City's defenders have not looked imperious.

The key to their phenomenal defensive record is avoiding those scenarios for long periods, courtesy of the side’s incredible domination of possession.

By being bold and aggressive in their pressing and attacking intent, Klopp's Liverpool may at times leave themselves exposed.

But if they want to take all three points on Sunday, and with new signing Virgil van Dijk bolstering the quality of their defence, it may be a risk worth taking.

Up against a fast and assertive side who have conceded only four goals in 11 unbeaten home matches, this should in theory be Manchester City's toughest test of the season.

Part 1: Albrighton back in title-winning form
Part 2: How Alonso has become a threat for Chelsea
Part 4: How Lingard has sped up Mourinho's Man Utd