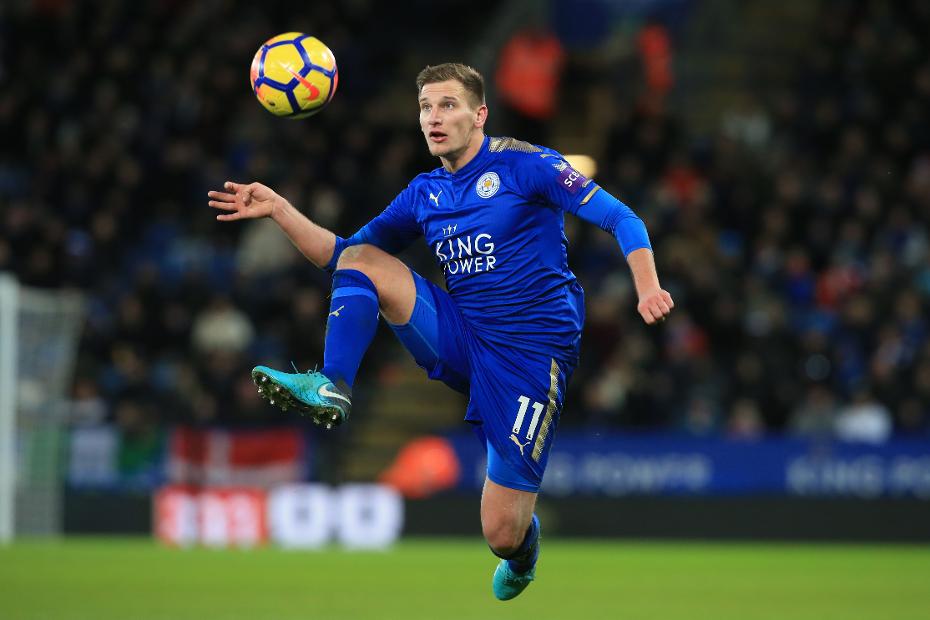 In each of the past two Premier League campaigns Marc Albrighton delivered two goals and six assists for Leicester City.

In 2017/18 the winger has already matched those feats with 16 matches still left to play.

Albrighton was on the bench for Claude Puel’s first two matches as manager, but soon won over the Frenchman with his high workrate and consistent delivery.

Since mid-November he has started 10 of 11 matches for Leicester, and he will almost certainly carry a threat for Chelsea at Stamford Bridge on Saturday.

While Albrighton has shown enough versatility to operate on the right of midfield, at wing-back, and in a No 10 role this term, he has been most effective on the left.

This is where I’d expect him to start against Chelsea.

To his credit, Puel was quick to spot that Albrighton’s pinpoint right-foot deliveries from the left are one of the team’s strongest assets.

Four of Albrighton’s five assists under the new manager have been similar in style.

So whenever Albrighton goes down that wing at Stamford Bridge on Saturday, Chelsea would be advised to get tight enough to block any attempted cross.

The chemistry Albrighton struck up with Mahrez and Vardy during Leicester’s title-winning season has come to the fore again.

The moment he shapes to deliver a ball into the box both Mahrez and Vardy instinctively get on the move.

Although he is asked to take a lot of Leicester’s set-pieces, Albrighton is undoubtedly Puel’s best and most prolific crosser from open play.

He has supplied 23 accurate crosses this term, eight more than his nearest team-mate, Mahrez, and his total of 15 accurate crosses is ranked seventh in the league for this metric, excluding corners.

Statistically, Albrighton’s form is comparable with the fantastic levels he reached in 2015/16.

While he is not creating quite as many goalscoring opportunities, his output in terms of goals and assists is far superior.

As an industrious, no-frills midfielder who largely sticks to basics, the 28-year-old is likely to remain an unsung hero at King Power Stadium.

But his output should not be underestimated.

When the two most recent Premier League champions lock horns this weekend Albrighton could well prove to be the biggest thorn in Chelsea’s side.

Part 2: How Alonso has become a threat for Chelsea
Part 3: Liverpool pace can end City's unbeaten run
Part 4: How Lingard has sped up Mourinho's Man Utd