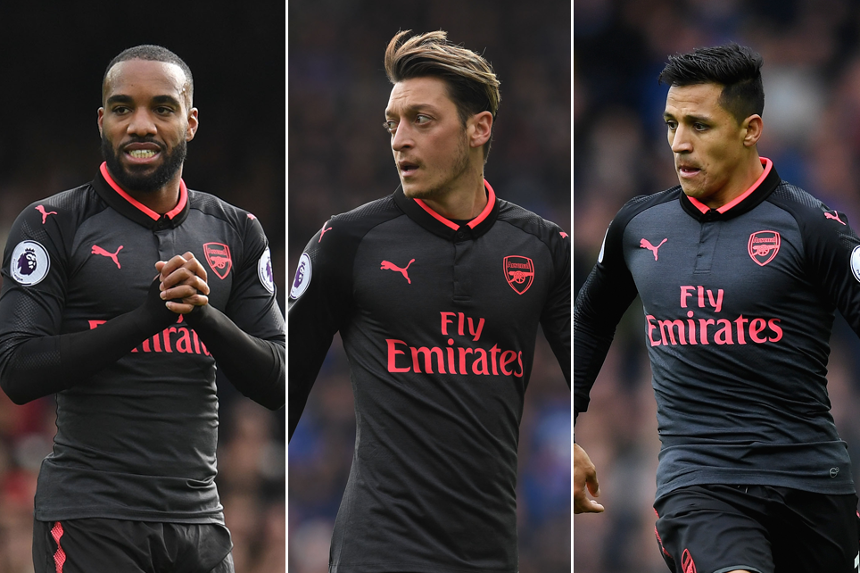 One of the strangest anomalies of Arsenal’s season is how little time Mesut Ozil, Alexis Sanchez and Alexandre Lacazette have spent on the pitch together.

Ahead of their daunting trip to Burnley, Adrian Clarke looks at how they can breach the Clarets wall.

In total the star trio of Ozil, Sanchez and Lacazette have shared just 265 minutes of collective action, less than 25% of Premier League match time in 2017/18.

During that period Arsenal have been prolific goalscorers, registering almost three a match, above their season's average of 1.83.

Seemingly spurred on by one another’s presence they each performed at a high tempo and were individually outstanding against Everton and Tottenham Hotspur, in particular Ozil, and Arsenal boast a 100% win ratio from those matches in which they have all started.

Arsene Wenger would be advised to start all three as often as he possibly can.

Interestingly, the XI of Cech, Bellerin, Koscielny, Mustafi, Monreal, Kolasinac, Xhaka, Ramsey, Ozil, Sanchez and Lacazette that was used in last week’s north London derby was the first time it has been selected by Wenger.

Most Arsenal fans would argue this is the best side available to him.

Stats with and without Arsenal's front three

Against an extremely stubborn and resilient Burnley side who have let in only two goals at Turf Moor, and only six from open play, all season, Arsenal will need this trio to combine brightly again on Sunday.

Sean Dyche’s men will defend deeper than Everton and Spurs, which may limit the opportunities Lacazette has to run in behind.

But rapid one-twos, quick-fire passing combinations and clever movement will be the way to undo Burnley.

Their centre-backs, Ben Mee and James Tarkowski, are two of the best penalty-box defenders in the Premier League, clearing many balls from the area each match.

So the best way to avoid them will be to pass through the lines and try to outfox them with sharp interplay.

Burnley are aggressive, compact and well organised at the back, so feeding a stream of high crosses into the box would be ill-advised.

Imagination and speed will be key to making a breakthrough.

While Arsenal have mental and defensive frailties away from Emirates Stadium that need to be addressed, the prospect of Ozil, Sanchez and Lacazette operating as a unit should immediately increase their firepower on their travels.

In Arsenal’s first four away contests (D1 L3) Wenger’s side lacked creativity and a cutting edge, managing just 11 shots on target and scoring only once, from a set-piece.

Burnley will make Sunday’s encounter a combative test, with the battle for headers and loose-ball recoveries critical to the outcome.

Therefore, first and foremost, Arsenal must be as competitive as they were at Everton and against Spurs last time out.

Provided they hold their own and match the home side’s aggression and workrate, Arsenal should be able to lay the right foundation for their fabulous front three to overcome Burnley.