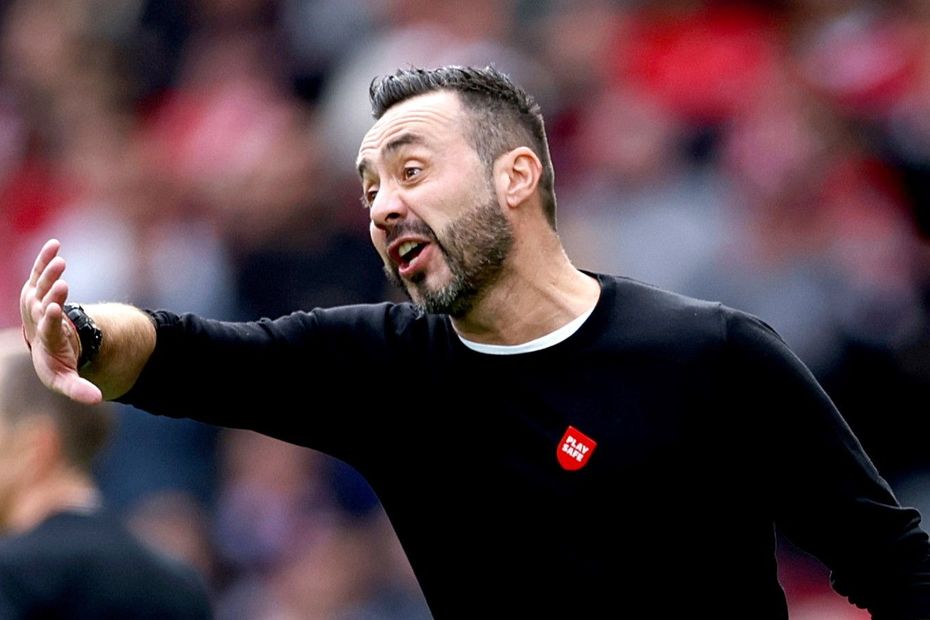 Brighton & Hove Albion were left in excellent shape by outgoing head coach Graham Potter, but this has not prevented Roberto De Zerbi from changing the side's identity.

The Italian is renowned for producing bold and adventurous teams, and you can already see this is the direction he is taking with the Seagulls.

His positive tactical approach against the division's strongest sides has instantly caught the eye.

De Zerbi kicked off his tenure with a thrilling 3-3 draw at Liverpool, before Brighton then became one of few visiting teams to dominate possession against Manchester City at the Etihad Stadium, albeit in a 3-1 loss.

The Seagulls then thumped Potter's Chelsea 4-1 at home in a display that dazzled with attacking intent from the very first whistle.

De Zerbi has wasted no time in stamping his mark.

One of the clearest tactical changes under De Zerbi has been his determination for Brighton to be press-resistant.

Even when opponents try to win turnovers inside their defensive third, he wants his goalkeeper and defenders to hold their nerve by playing short through the thirds.

It is a risky policy, but when the Seagulls do beat the press, as they did on numerous occasions against Chelsea, they are likely to find more space to create problems at the other end of the pitch.

Brighton are averaging 130 extra passes per match under De Zerbi, which translates to a 10 per cent rise in average possession.

Landing on a 4-2-3-1 formation as his preferred shape, the 43-year-old does not want his defenders or midfielders to attempt too many long passes.

Centre-backs Lewis Dunk and Adam Webster have significantly reduced the number of hopeful forward passes they pump towards the wings, or the striker.

Since Potter left for Stamford Bridge, Brighton's long-pass output has fallen by 24 per cent.

The Seagulls have pressed superbly for a couple of seasons, and De Zerbi wants to continue promoting that aspect of their play.

He has demanded that his players be aggressive when they close down opponents, and they have responded by averaging 2.3 shots per match from high turnovers; up from 1.7 under the previous regime.

No Premier League side has attempted more shots from high turnovers this season than Brighton.

On the flip side Brighton are now more likely to concede chances by relinquishing possession inside their own half.

Brighton under De Zerbi are averaging 9.9 high turnovers against them per match, which is a steep rise from 6.5 under Potter.

But in the long term, the Italian feels the rewards for sticking to his principles will outweigh the risks attached to playing cat and mouse with opposition forwards inside their own defensive third.

Brighton's tactical evolution under De Zerbi will be exciting to watch.

His boldness may well make them less solid in the short term, but once Brighton's players become fully accustomed to his methods, this style of play has the potential to take the club on to the next level.

Although they remain underdogs in the race for a top-six finish this season, under De Zerbi this exciting Brighton side could soon become regular challengers.