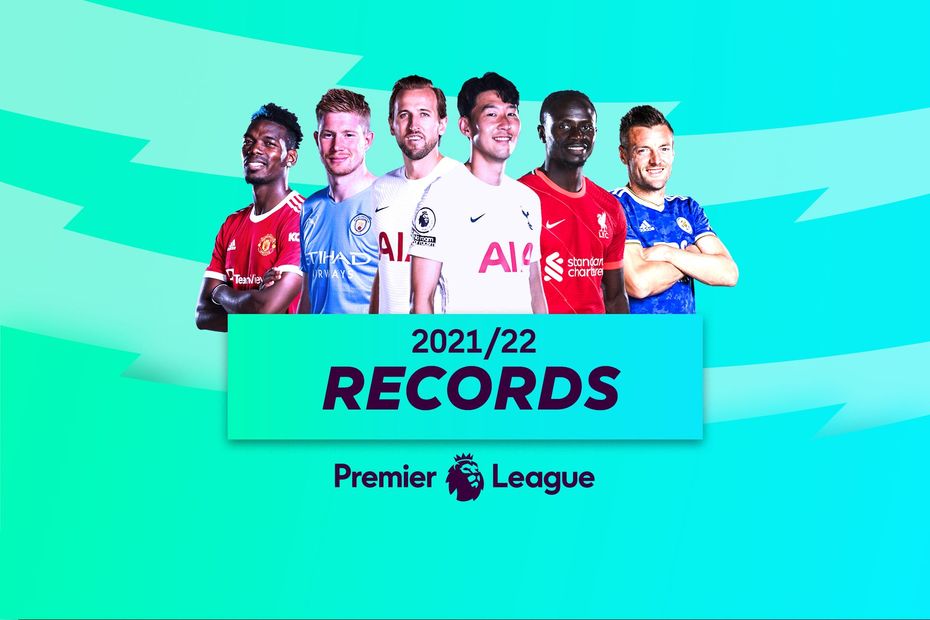 With the curtain closed on another enthralling Premier League season, we look at additions to the competition's history books made in 2021/22.

In Tottenham Hotspur's 4-0 win at Leeds, Harry Kane and Son Heung-min combined to score for the 37th time in the Premier League. The record had belonged to Chelsea greats Didier Drogba and Frank Lampard.

Manchester United extended their streak to 29 matches unbeaten on the road. The run, which had started in February 2020, ended with a 4-2 defeat at Leicester City in October 2021.

Consecutive goals against one side

Sadio Mane became the first player to score in nine consecutive matches against a single opponent in the Premier League. Crystal Palace are the team the Liverpool star loves to face, with the run starting in August 2017 and being further extended this season in a 3-0 win at Anfield last September.

Most assists in a match

On the opening weekend of the campaign, Paul Pogba joined an illustrious list of players to provide four assists in a single match. Pogba achieved the feat in a 5-1 win against Leeds United, becoming the seventh player in PL history to do so after Dennis Bergkamp, Jose Antonio Reyes, Cesc Fabregas, Emmanuel Adebayor, Santi Cazorla and Harry Kane.

In going through the entire season unbeaten at Anfield, Virgil van Dijk set a record for the most home fixtures for one club without ever losing, 64 matches.

Fewest home defeats in a season

Liverpool made Anfield a fortress during the 2021/22 campaign and did not lose a single fixture at home. A total of 15 matches were won with only four drawn.

Most home defeats in a season

Watford fans did not have much to shout about at Vicarage Road in 2021/22. Their 15 home defeats were the most of any side in a single campaign and the 11 losses in a row they recorded were also a first. The 46 goals the Hornets let in at home were unprecedented, too.

There were also a number of significant landmarks achieved by players and clubs in 2021/22.

Greatest away from home

Kane overtook Wayne Rooney as the highest goalscorer in Premier League away matches, netting his 95th goal in Spurs' 2-0 win at Brighton & Hove Albion. He finished the season on 96 away goals.

Mane has not lost any of the 52 Premier League home matches in which he has scored (W47 D5), the best such unbeaten record in the competition's history.

Spurs triumphed over Leicester 3-2 despite trailing after 94 minutes and 52 seconds. That beat Man City's incredible title-winning win over QPR in May 2012 (91:14) as the latest a team has been losing but gone on to win in a Premier League match. Steven Bergwijn's two goals also helped Spurs win the Oracle Most Improbable Comeback award.

One of the most incredible late turnarounds ever seen in the #PL 😱@Oracle's Most Improbable Comeback award for 2021/22 goes to @SpursOfficial ✨ pic.twitter.com/jC7KQ8CMNH

Most Player of the Season awards

Most Player of the Month awards

Kane joined Man City legend Sergio Aguero in winning the accolade for a seventh time, after claiming the EA SPORTS Player of the Month award in March.

Before joining Newcastle United in the January transfer window, Chris Wood scored the 30,000th goal in the competition. He netted for Burnley in a 1-1 draw at home to Leeds United in August.

Clubs relegated the most times

With his strike in Leicester's 2-0 win at Burnley, Jamie Vardy broke Ian Wright's record as the player with the most Premier League goals after the age of 30. He now has 94.

Staying up at the first attempt

Brentford finished an impressive 13th in their first Premier League season, joining Brighton in never being relegated since promotion. The Seagulls have been in the top flight since 2017/18.

Most yellow cards in a season

Leeds became the first team to receive 101 yellow cards over the course of a season.

Spurs striker Kane scored his ninth goal on the final day of the Premier League season, the joint-most in the competition’s history alongside Andrew Cole and Les Ferdinand.

While on loan at Southampton from Chelsea, Armando Broja became the youngest player in Premier League history to score in each of his first four home starts in the competition (20y 123d).

Kane scored his ninth Boxing Day goal in the Premier League, the joint-most in the history of the competition along with former Liverpool, Man City, Leeds and Blackburn Rovers striker Robbie Fowler.

Chelsea became the first team to win seven consecutive away London derbies in English Football League history with their 1-0 victory at Brentford.

Thomas Tuchel's Chelsea also became the first team in Premier League history to go through a whole season without ever being behind at half-time.

Ronaldo broke Damien Delaney's record (11 years and 155 days) for the biggest gap between Premier League appearances. When the Portuguese made his second Man Utd debut in a 4-1 win over Newcastle on September 11 2021, it was 12 years and 118 days since his previous top-flight appearance in May 2009.