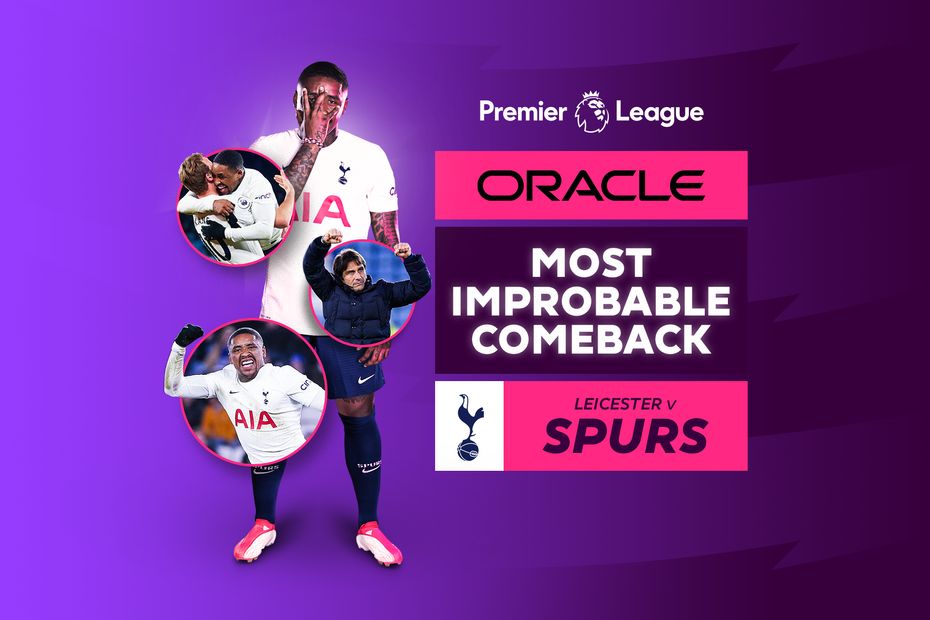 How the Most Improbable Comeback award works

Stevie Bergwijn: “What was I thinking? Nothing... just score!” External Link
What are Oracle's Match Insights for the Premier League?

In a season of so many thrills and rollercoaster matches, the winner of the Most Improbable Comeback award, powered by Oracle, the Premier League's official cloud provider, was always going to be something special.

And that was Tottenham Hotspur's unbelievable 3-2 win at Leicester City in January.

Trailing 2-1 at the King Power Stadium going into the fifth minute of stoppage time, Spurs' hopes of salvaging anything from the match and boosting their hopes of the top four looked gone.

But substitute Steven Bergwijn scored twice in less than three minutes to turn the match on its head. Indeed, the three points would ultimately prove crucial as they finished ahead of north London rivals Arsenal for fourth by only two points.

One of the most incredible late turnarounds ever seen in the #PL 😱@Oracle's Most Improbable Comeback award for 2021/22 goes to @SpursOfficial ✨ pic.twitter.com/jC7KQ8CMNH

Spurs claimed the inaugural award on the basis that they came back to win from the most improbable circumstances, or where there was the lowest probability of victory.

This was based on the Win Probability Statistic developed by Stats Perform, which calculates the chance of a team securing a win or draw by simulating the remainder of the match 100,000 times.

The probability of a win is calculated every minute for every Premier League match in a season, in real-time.