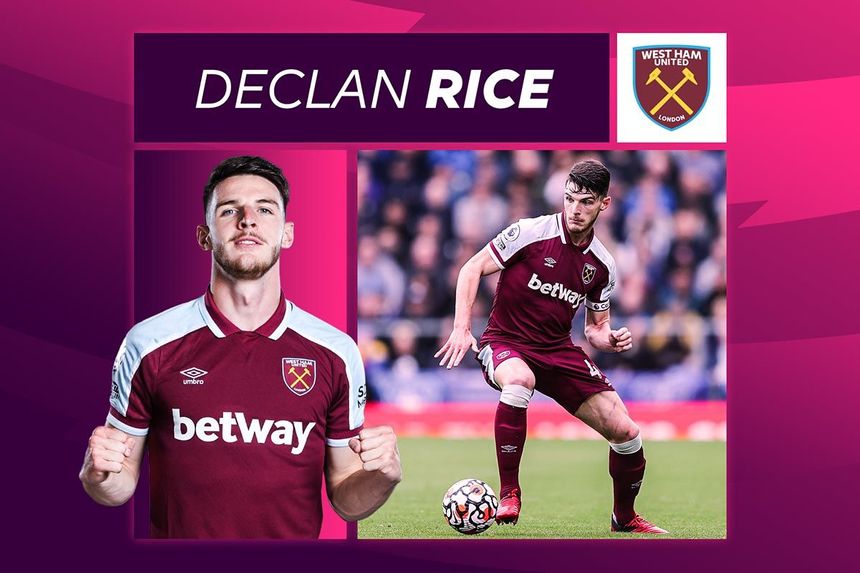 Declan Rice: West Ham United want to push on and do better External Link
Rice: People who are abused should never be alone
Flashback: Rice's long-range stunner against Watford

Declan Rice has taken his game to an even higher level this season as he prepares to face Tottenham Hotspur on Sunday.

The West Ham United player regularly dominates opponents in central midfield, just as he did last weekend in a 1-0 win at Everton, and has comfortably been one of the Premier League's best performers across the opening eight matches.

The midfield dictatoEarly on in his career, after making the transition from being a central defender, Rice was widely regarded as a defensive-midfield stopper.

But over the last three years he has shown he is in fact a highly accomplished all-rounder.

For example, during the current campaign the 22-year-old has raised the number of passes he makes per 90 minutes from 48 to 61.

It is a sign of both his growing influence and also of how well controlled in possession this West Ham team are under David Moyes.

During the victory at Goodison Park last Sunday, Rice produced 79 passes with an impressive 91.1 per cent success rate.

In possession every aspect of Rice's game has progressed this term.

His long passes are finding their intended target more often, his distribution accuracy has sharpened up overall, and that growth in confidence has encouraged him to get forward with greater frequency.

Rice has made 10 key passes this season, including a pair of excellent assists for Michail Antonio against Leicester City and Leeds United respectively.

Moving up the pitch

We are also seeing Rice stride past opponents with ease when he has the ball at his feet.

Compared with all other orthodox central midfielders in the Premier League at present, only three have completed more dribbles than Rice's 13.

One of those is Spurs' Pierre-Emile Hojbjerg, so it will be fascinating to watch their duel unfold at London Stadium this weekend.

While Rice has undoubtedly become more adventurous this season, he has not lost any of the defensive qualities that are so important for Moyes' side.

No midfielder has made more interceptions than Rice's 16 or exceeded his eight blocks.

As he gains experience, Rice is selecting his choice of tackles more carefully.

He is waiting for the right moments to commit to a challenge, raising his tackle-success rate from 59.3 per cent last season to 76.9 per cent this term.

Tanguy Ndombele has caught the eye in a No 10 role for Spurs in recent matches so it will be part of Rice's brief, alongside Tomas Soucek, to ensure the Frenchman does not influence this derby.

Whenever Harry Kane drops into deeper positions, you can also expect Rice to be on hand to close down space.

Based on the evidence of recent form, Rice is more than capable of limiting Spurs' combined impact between the lines, as was demonstrated by how he regained the ball at Everton.

Last Sunday he produced 11 ball recoveries, two interceptions and a block, with most of those contributions occurring between the width of both penalty boxes.

If Spurs are to enjoy attacking success at West Ham this Sunday, they are likely to find it easier targeting the wide areas.

Inside that central midfield domain Rice is playing well enough to govern proceedings with ease.

Part 1: Bernardo excelling as two players rolled into one for City
Part 2: Villa must stay secure when pressing Arsenal
Part 4: Fernandes and Pogba have skills to break down Liverpool