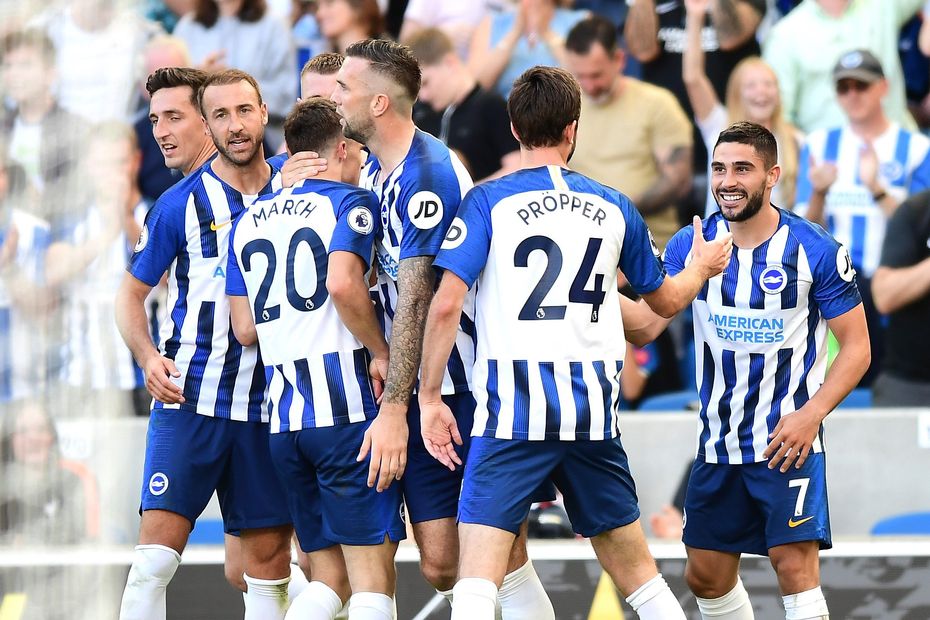 Brighton & Hove Albion will present a unique challenge to Tottenham Hotspur in the opening fixture of Matchweek 8.

In a tactical sense the Seagulls have become much harder to predict under Graham Potter.

The new head coach has transformed Brighton from a cautious defensive team into a bold, possession-based side capable of switching formation or style at any stage of a match.

At the moment Potter prefers to start in a 3-4-2-1. But throughout the 90 minutes he tweaks the shape and roles of his players within that formation.

Selecting a side packed with versatile players who can adapt to those changes means it will difficult for Mauricio Pochettino to make concrete plans for Saturday’s opponents.

Potter has encouraged his players to be more confident in possession.

Because of this new philosophy Brighton’s average number of successful passes per match has risen from 278 to 416.

Last season they had an average possession of just 41.39 per cent, the fourth-lowest in the Premier League.

Under Potter their 55.1 per cent share of the ball is the seventh-highest, and more than both Chelsea and Arsenal.

Therefore Spurs will face a Seagulls side who are barely recognisable in style from the last time they visited the Amex Stadium just over a year ago.

That day the hosts boasted just 28.6 per cent possession in a 2-1 home defeat.

Potter has brought Adam Webster and Dan Burn into his defence, two players who are very comfortable in possession, but for Lewis Dunk the change has been tremendous.

Now asked to keep his distribution shorter and to play through the lines with greater confidence, the centre-back is making 60 per cent more passes per 90 minutes.

In central midfield Dale Stephens and Davy Propper have also adapted to a new style with aplomb.

But despite their impressive style change, in truth the Seagulls have failed to build on a fabulous 3-0 win at Watford on the opening weekend.

Their performances have drawn admiration but Brighton have only scored twice and failed to win in six matches since that victory.

Keeping the ball has eased the pressure on their defence, who are facing fewer shots, but as an attacking force Potter’s men remain a work in progress.

Turning possession into more goals will the key to their fortunes under Potter.

The 23-year-old is sharp with his movement and likes to run the channels.

His pace has added a fresh element to their forward play, so Spurs will need to be wary of his movement.

They defended poorly in the 7-2 loss to Bayern Munich in the UEFA Champions League in midweek and must improve to keep Maupay quiet.

If they lose concentration the former Brentford forward has the ability to run onto through-balls and score.

He gives the side more penetration than they possessed under Chris Hughton in 2018/19.

Serge Aurier’s suspension leaves Spurs a little light on options at right-back, which may suit a Seagulls side who tend to focus many of their attacks down that flank.

In recent matches winger Steven Alzate has combined well with Aaron Mooy down Brighton’s left side, with Maupay also keen to make runs down the left channel.

In fact when Murray is deployed as a centre-forward, Maupay is usually moved to a position as a left-sided forward.

In their last two home matches Brighton have enjoyed launching the majority of their forays forward from the left.

So whoever steps in for Aurier will be in for a busy afternoon at the Amex Stadium.