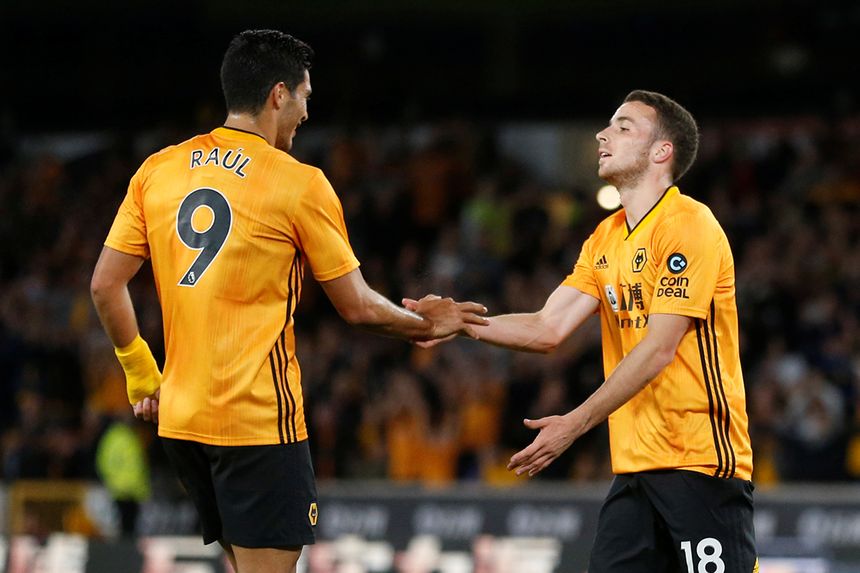 Gibbs-White happy to get off the mark External Link

Wolverhampton Wanderers were a better team when they had less of the ball last season.

Reliant on a well-drilled 3-5-2 shape to hold firm out of possession, Nuno Espirito Santo's side sprung into life to inflict misery on a number of more established teams on the counter-attack.

In their goalless draw at Leicester City on opening weekend, Wolves chose to deploy the same strategy.

Enjoying just 30 per cent of possession they restricted Leicester to just one shot on target.

So when Manchester United visit Molineux on Monday, they can expect a gameplan from the home side that is likely to be built around solidity and fast, clinical transitions.

Diogo Jota had to wait until 5 December 2019 for his first Premier League goal, but the 22-year-old now looks fully at home at this level.

Forging an outstanding partnership with Raul Jimenez during the second half of 2018/19, Wolves boast a strikeforce who can trouble anyone.

They have been particularly lively during a pre-season that has included three UEFA Europa League qualifying ties.

In the two matches they started together, a 4-1 win v Crusaders and a 4-0 triumph over Pyunik Yerevan, they combined to deadly effect.

Jimenez scored twice in each appearance, all from Jota assists, and the Portuguese star also delivered a third assist against Pyunik, too.

On Thursday they both came off the bench  to combine for Wolves' fourth goal in the second leg, with Jota latching on to Jimenez's lobbed pass to finish with an acrobatic effort.

Considering less than 20 per cent of the match was played inside Wolves' final third, their front two were still able to cause problems against Leicester.

Jota, who loves to make runs off target-man Jimenez, broke into some good areas to fire off shots and their combination play was terrific.

The pair have built up a good understanding of where each other will be and have the ability to both create and score goals.

Jota and the Mexican found each other with six passes apiece against the Foxes, with neither passing to another team-mate as often.

A tougher examination for Maguire and Man Utd defence

But in this encounter, he will have more to think about.

When balls are played into the box from wide areas, Jota and Jimenez have the movement and skill to stretch the centre-back.

The hardworking Jimenez will also attempt to drag Maguire, and his partner Victor Lindelof, all over the pitch.

When he goes short, or towards the flanks, the spare United central defender must ensure they keep close tabs on Jota, who makes fine secondary runs.

If United leave as much space behind the full-backs as they did against Chelsea, Jota will spin down the sides from long passes and accurate diagonals to hurt them.

Should Ole Gunnar Solskjaer's side come away from Molineux with a clean sheet, it will be another encouraging sign of their improvement in defence this season.