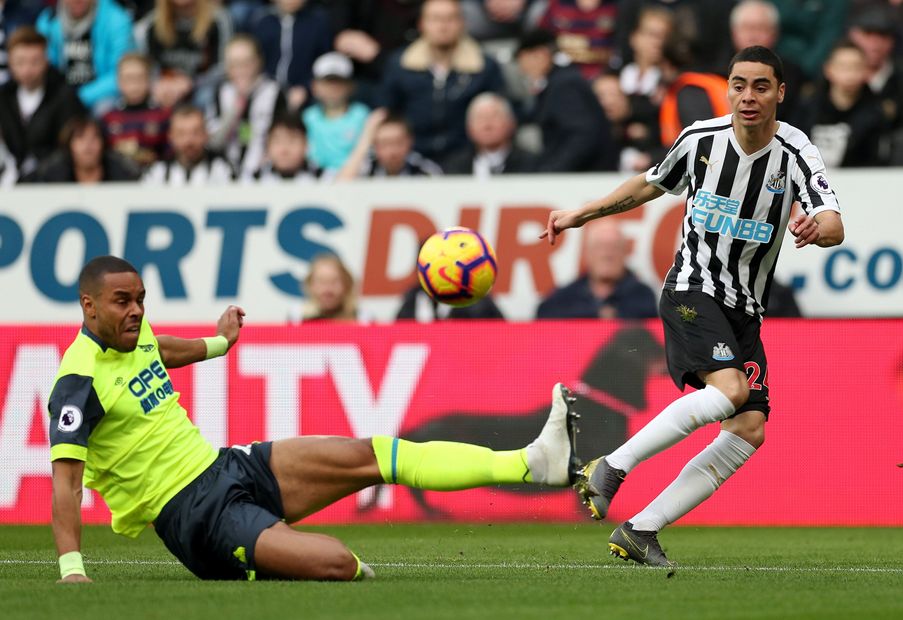 With his balance, turn of pace, quick feet and cultured left foot, Miguel Almiron has brought a sparkle to Rafa Benitez’s Newcastle United side.

Operating as a left-sided forward in a 5-4-1 system, the record signing has brought energy and vigour to a Magpies team who had been struggling for goals.

Prior to the Paraguayan’s first start against Huddersfield Town on 23 February, Newcastle had scored more than once in only five of their 26 top-flight fixtures.

But they have now done so in four of their last six matches.

The 25-year-old produced an exceptional display on his full Premier League debut, wowing St James’ Park with his attacking flair in the 2-0 victory over Huddersfield.

The first impressions of Almiron were overwhelmingly positive as he delivered a stream of shots, crosses and key passes, while making an incredible 31 sprints.

Although he remains influential, the former MLS star has struggled to maintain the performance level he displayed in his first start.

There have still been glimpses of magic.

Almiron’s willingness to let fly with powerful shots from distance and his ability to draw fouls inside the opposition half are just two of the plus points to mention.

But in general he has not replicated the same quality across the last five matches.

At home to Crystal Palace this weekend, Magpies fans will hope he can rediscover the brilliance they witnessed against Huddersfield.

In his last two away matches, Almiron has shown Benitez he can follow instructions, showing discipline in helping Newcastle to maintain their shape on the left side of a midfield four.

But many of the 25-year-old’s most exciting moments so far have come when he has drifted into central areas in the final third.

He frightens defenders when running at them down the spine of the pitch, threatening to create chances or unleash shots.

On Saturday I would expect to see Almiron given more of a licence to hurt Palace in whichever areas he sees fit.

If he plays closer to striker Salomon Rondon, I would expect both players to make a big impact.