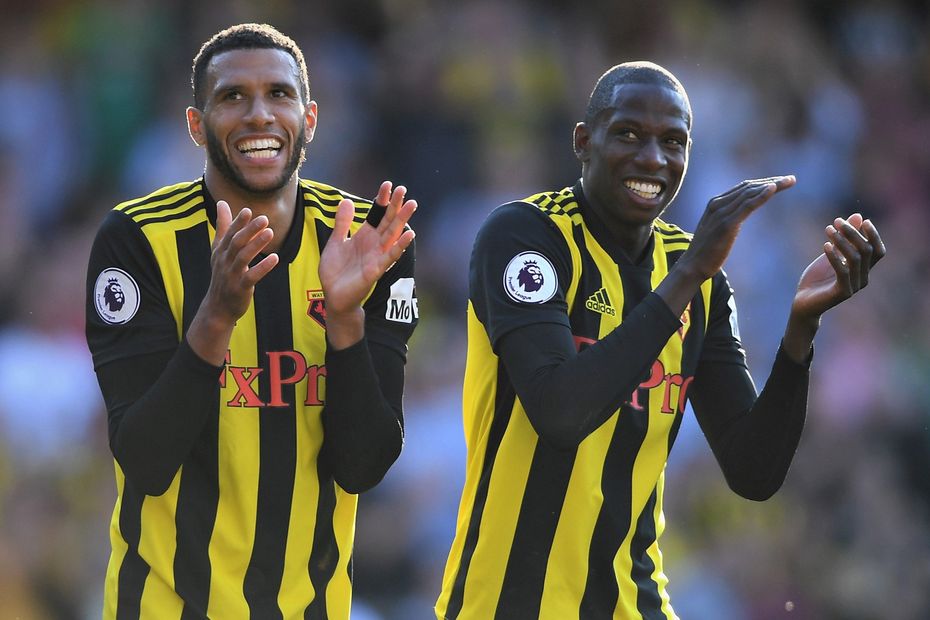 Deeney: You can see the passion and desire External Link
Match preview

Watford’s success this season has been built on the strength of Javi Gracia’s collective, but the midfield axis of Etienne Capoue and Abdoulaye Doucoure is undeniably the heartbeat of their side.

Using their combined power, athleticism and quality of passing, they are a formidable pairing.

Watford will start as underdogs at the Etihad Stadium, but if Capoue and Doucoure perform to their maximum, it will give the Hornets a platform to upset Manchester City.

Capoue has developed into one of the Premier League’s most effective defensive midfielders.

Rarely venturing more than 20 yards into the opposition half, the Frenchman’s game has become more disciplined and simplified under Gracia.

He makes more than 50 passes a match, with an impressive accuracy of 83.5 per cent, the best of any Watford regular.

But Capoue’s forte is intercepting the ball.

No one in the division aside from Cardiff City centre-back Sol Bamba, with 81, has achieved more interceptions than his 74.

Also ranked 10th in the PL for tackles won and possession won inside the middle third, Watford have a top-class midfield enforcer.

Breaking up play in front of a four-man defence, Capoue will be vitally important on Saturday, as he seeks to stifle the service into the Hornets' nemesis in recent encounters, Sergio Aguero.

Doucoure is an ideal partner for his compatriot Capoue.

He too is an excellent retriever of possession, flying into lots of tackles and boasting even more ball recoveries than his team-mate.

He has created 26 chances this season, all but two coming from open play.

This places him third at Watford, behind set-piece specialist Jose Holebas and striker Troy Deeney.

So, in effect, this powerhouse who loves to surge down the middle of the field is Watford’s most likely creative influence.

Doucoure also scores goals. Running on to three right-wing crosses this season, he has converted two fantastic headers and scrambled home another from inside the box.

So when Gracia’s team gain territory at City, watch out for Doucoure arriving late to try and get his name on the scoresheet.

Among his team-mates, only Deeney and Argentine playmaker Roberto Pereyra have managed more shots on target.

*Players who featured for 500+ mins

The trip to the Etihad Stadium will be a stiff test for Watford’s midfield duo.

But, with Fernandinho and Kevin De Bruyne missing through injury for Man City, the Hornets may have the chance to seize the initiative and earn a first Premier League win over the champions.