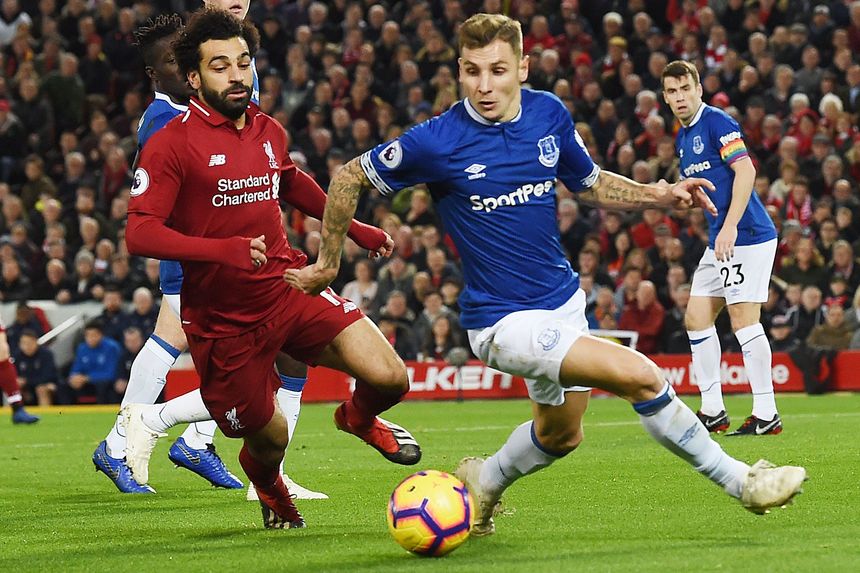 Adrian Clarke looks at a key tactical battle in Matchweek 29.

Lucas Digne has probably been Everton’s best player this season.

Since his arrival from Barcelona in the summer, the defender has been a model of consistency, adding quality to Marco Silva’s side on and off the ball.

He snaps into his tackles, drives forward and is a superb distributor of the ball with his left foot.

His performance will be key to Everton’s hopes of success in the Merseyside derby.

From wide areas it is hard to find a more accurate or prolific left-footed crosser in the division.

Digne has sent 115 crosses into the penalty area from open play this term, 55 more than team-mate Seamus Coleman.

Finding his intended target 22.6 per cent of the time, the Frenchman has been a constant supply line.

His three assists, two for Dominic Calvert-Lewin and one for Kurt Zouma, all stemmed from excellent left-wing centres aimed for the head.

If you discount corner-kicks, Digne has been the most successful crosser in the Premier League this season.

Provided he can get into the right areas against Liverpool, Digne’s centres are likely to trouble their opponents.

Inspired by their dynamic 25-year-old, Everton’s left flank is often the source of their biggest threat.

Although Richarlison is out of form he has the skills to cause problems and his deputy, Bernard, is an underrated creator down that side of the pitch.

Bernard’s wonderful run and cross to tee up Gylfi Sigurdsson for his second goal against Cardiff City on Tuesday night may be enough to persuade Silva to start him ahead of Richarlison against Liverpool.

The statistics demonstrate how inventive Digne and Bernard are for Everton. From open play they have proven to be instrumental creators.

His 19 chances from corners and free-kicks this season is the 10th-best return in the division. He has also scored twice from free-kicks, firing in long-range strikes against Burnley and Watford.

If Liverpool lose focus in set-play situations, Digne’s accuracy could prove their undoing.

Mohamed Salah's duel with Digne will be an intriguing contest if he starts as Liverpool’s right-sided forward.

The Everton left-back is a strong ball-winning type who will thrive on making it a physical battle.

Digne has won the second-most tackles and interceptions of any team-mate, recording 34 and 40 respectively.

Liverpool are understandably favourites and will push Everton back for long periods, but in front of the Goodison Park faithful the Blues will also be expected to show attacking intent.

Digne will be key to that. If he can balance his attacking instincts with the ability to keep Salah quiet, he could have a significant bearing on the outcome of the 200th top-flight meeting between the sides.