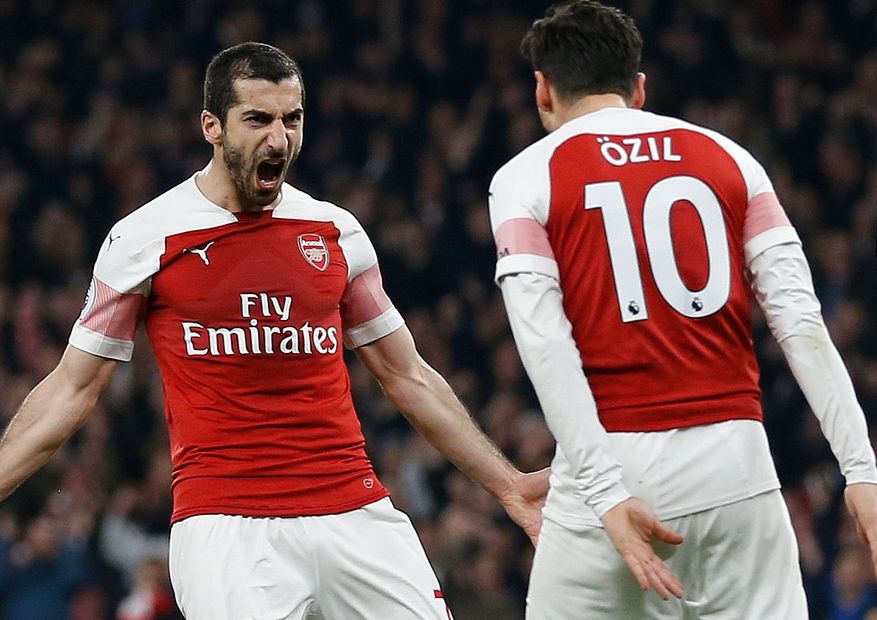 Moussa Sissoko: “A derby is all about mentality” External Link
How Rodgers can revitalise Leicester

Henrikh Mkhitaryan and Mesut Ozil are both at their best when given the freedom to roam in the spaces behind a main striker.

Inventive, full of bright movement and outstanding travellers with the ball at their feet, they help Arsenal make the transition from defence to attack with speed and efficiency.

Yet since Unai Emery took charge in the summer these two talented stars have barely played together in the Premier League.

Sharing a pitch for just 419 minutes, about 16.6 per cent of the campaign, they were selected in a 3-4-2-1 for the first time in Wednesday night’s resounding 5-1 home success against AFC Bournemouth.

The pair combined well behind the front man and, liberated by the tactics, were the inspiration behind a free-flowing display.

Should Emery use the two in the same formation for Saturday’s north London derby against Tottenham Hotspur?

With five players strung along the backline and a solid central-midfield combination protecting them, there should be enough stability down the spine to gamble on the pair's match-winning qualities.

Fresh from spells on the sidelines, Ozil and Mkhitaryan have looked sharp across the last two Premier League matches.

Difficult to track, scoring wonderful goals and teeing up plenty of chances for others, they are in a positive frame of mind ahead of their meeting.

Leaving out one of Alexandre Lacazette or Pierre-Emerick Aubameyang to accommodate these two creators in their best positions also makes sense at the moment.

As a pairing the two strikers have not quite clicked. Although Aubameyang is comfortable playing wide left, Arsenal have scored at a slightly faster rate with just one of the two strikers on the pitch this season.

Emery’s perfectly timed use of Lacazette from the bench in Arsenal’s 4-2 win against Spurs this season also proved the importance of having a strong Plan B.

If Emery's mindset for the derby is to be bold, unleashing Ozil and Mkhitaryan behind a main striker would ask questions of Mauricio Pochettino’s defenders.

In a 3-4-2-1 they will pull wide to both flanks, drop deep to get on to the ball or break into the box, making them extremely difficult to track.

AFC Bournemouth never came close to handling them and if the Spurs defenders do not communicate well, they will have problems.

It is worth noting that when they have been on the pitch together Arsenal have played some of their most fluid football.

They both started in a 4-2-3-1 system at Chelsea and at home to Leicester City and Liverpool, matches where Arsenal attacked with great cohesion.

Should both start on Saturday, it will be a sign of Emery’s willingness to evolve the make-up of his team.

Even if he plays safe and goes with a more tried-and-trusted XI, I expect this option to be used more frequently until the end of the campaign.

Part 1: How Rodgers can revitalise Leicester