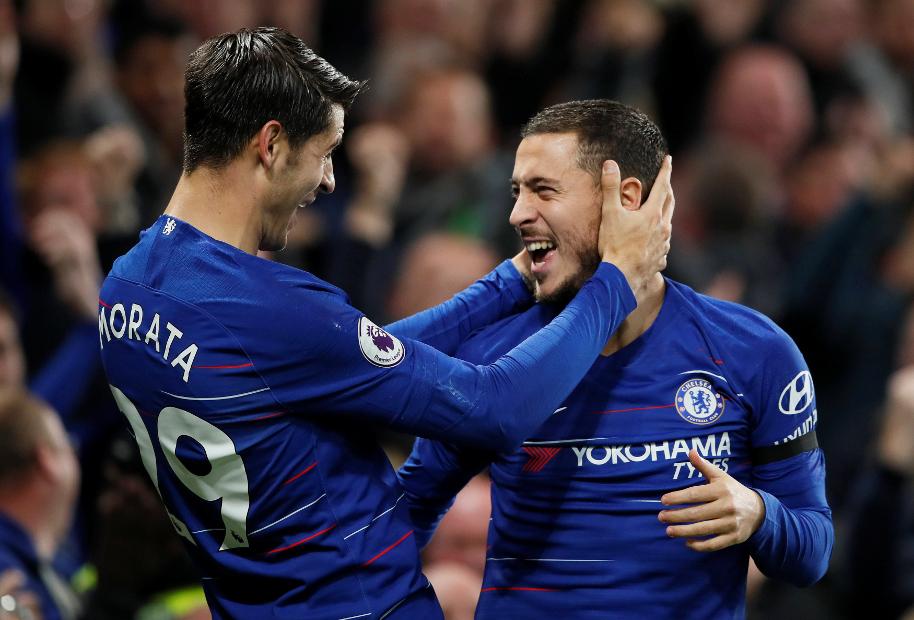 A sparkling start to 2018/19 has Chelsea supporters understandably excited about "Sarri-ball".

Maurizio Sarri has dramatically transformed the team’s shape and style, with great early success, kicking off his Premier League career with an 11-match unbeaten start.

His Chelsea side have scored the second-highest number of Premier League goals and Everton will know they need an extraordinary defensive display to contain them at Stamford Bridge on Sunday.

In possession Sarri’s Chelsea line up in a 4-3-3 formation that relies on good distribution from their deep-lying midfielder Jorginho and centre-back David Luiz.

The pair have made 366 and 338 forward passes respectively, placing them first and third in the PL rankings.

With most Chelsea players spreading out ahead of the ball, the team create more space for players to receive passes in advanced areas.

Chelsea are especially adept at executing vertical passes that bounce off a midfielder or a forward. These balls set up a secondary forward pass that releases runners in behind.

The fast and intelligent movement of Eden Hazard and a resurrected Alvaro Morata help facilitate this tactical ploy, which has worked a dream.

Morata’s ability to dart beyond his markers, as when scoring at Burnley recently, is the main reason why he is preferred to Olivier Giroud.

No PL side comes close to slipping as many through-balls past the last line of defence as Sarri’s men.

Sarri’s influence on the training ground has made Chelsea a far better team in possession.

They move the ball much faster than under Antonio Conte last term, and shorter too. The ratio of long balls has dropped from 10.1 to 6.6 per cent, and they sweep forward in a more cohesive and dynamic way.

Deploying N’Golo Kante and either Ross Barkley or Mateo Kovacic as the wide central midfielders has been a success from an attacking perspective.

Using their speed on the ball to surge between the lines, they have all injected purpose into Chelsea’s play, driving into half-spaces at regular intervals.

This quicker brand of football has helped the full-backs get into great areas to cross and, with opponents stretched, Willian and Hazard have enjoyed a fraction more space.

Willian, with 19 chances, and Hazard, with 18, are second and third respectively behind David Silva for creating the most chances from open play this season.

The table above demonstrates a thirst for goals that is unlikely to dry up under their bold Italian head coach.

Chelsea’s improvement has been off the charts.

As "Sarri-ball" continues to develop, or until rival sides come up with strategies to negate it, Chelsea will become increasingly difficult to contain.

Part 1: Dynamic Milner more crucial than ever for Klopp
Part 2: Lucas emerging as the best foil for Kane
Part 3: Silva stepping up in absence of De Bruyne