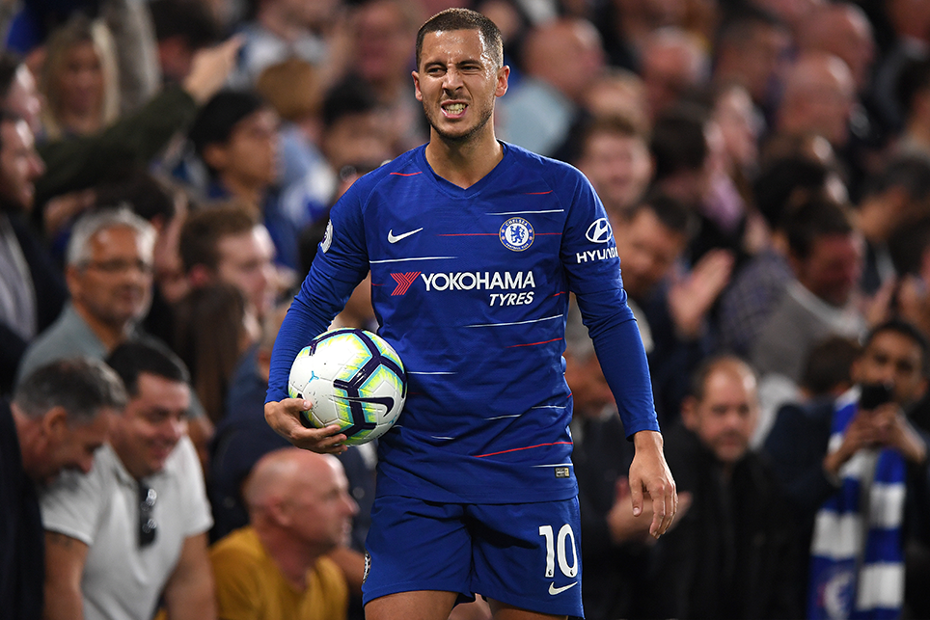 Eden Hazard has been the Premier League’s strongest performer by quite some distance this season.

Scoring or assisting at least one goal in all but one of his eight appearances so far, the Chelsea star has been a class apart.

Tormenting defenders at will, his end-product has been astoundingly good.

In addition to his goal count, Hazard is ranked inside the division’s top 10 for the most key passes, assists, shots on target, times fouled and completed dribbles.

Maurizio Sarri’s high-tempo style and attacking philosophy has helped Hazard to get on to the ball more often, and in better areas.

Primarily used as a left-sided forward, but given freedom to roam, the 27-year-old has enjoyed plenty of service.

So, why the change?

Chelsea are moving the ball quicker between the lines, helped in no small measure by new recruits Jorginho and Mateo Kovacic.

This has helped release their best player into space more frequently, and Hazard is deadly when given room to run with the ball.

To have any hope of collecting points this Saturday, Manchester United must find a way to nullify September's EA SPORTS Player of the Month.

There is no fail-safe method for negating Hazard’s threat.

However, West Ham United successfully crowded him out last month, earning a 0-0 draw at London Stadium by flooding the midfield and defending with aggression in central areas.

The Belgian is so tricky with and without the ball that it is essential to cluster bodies around him.

Getting tight enough to prevent him from turning is important, but so too is having at least two players in close proximity to provide cover.

The other strategy is to man-mark the gifted playmaker, a ploy that has been used by Jose Mourinho in the past.

In a 2-0 victory for United at Old Trafford in April 2017, Ander Herrera did an outstanding job tracking Hazard’s every move.

It is something the Portuguese manager has tried more than once, with Phil Jones also assigned to shadow Chelsea’s No 10.

Overall, Mourinho has a respectable record at containing his former player.

However, ahead of this encounter the issue for Mourinho is a lack of viable options for that specialist role.

Herrera has barely featured this season and is carrying a knock, while his fellow midfielders Nemanja Matic, Scott McTominay and Marouane Fellaini also have injuries that are being assessed.

The most likely candidates are McTominay or Matic. But if Hazard stays high and wide it will leave a full-back redundant, with gaps infield.

If United do opt for a man-marker it will still require a concerted team effort to stop the Blues' superstar.

Mourinho's players must work incredibly hard to block the forward passes to Hazard, as well as shrinking space between the lines.

Such a ploy requires serious focus and coordination and last time out, at home to Newcastle United, the Red Devils defended very poorly as a team.

Huge improvements will be needed if Mourinho is to achieve his aim of shutting out the Premier League’s leading light.

Part 1: Richarlison has tools to lead line for Everton
Part 2: Huddersfield can give Liverpool aerial challenge