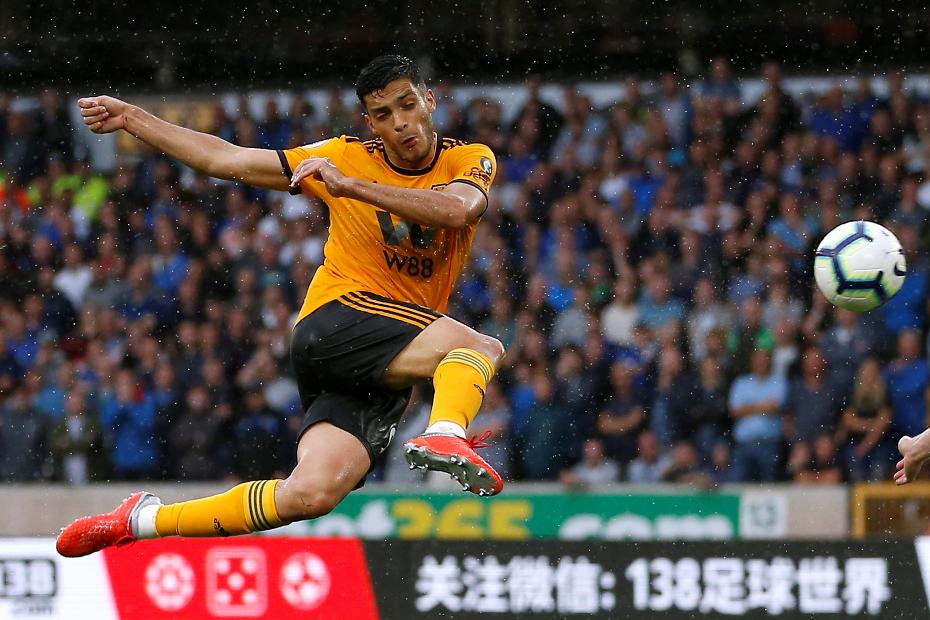 Wolverhampton Wanderers have stuck with the tactics that got them promoted, playing confident and expansive possession football for their first two Premier League matches, even it has brought only one point.

Nuno Espirito Santo’s side have boasted an average 57 per cent share of the ball so far, the fifth-highest total in the competition.

This Saturday, when Manchester City visit Molineux, the home side are certain to have far less possession and will have to alter their game plan.

Two to watch on the counter

Loan striker Raul Jimenez has been one of Wolves' most impressive performers in the opening fortnight.

He is hard-working, has excellent movement and pace and caused problems for both Everton and Leicester City.

Jimenez scored a wonderful header in Matchweek 1 and then hit a post at the King Power Stadium last weekend.

The 27-year-old’s energy provides natural impetus, and his willingness to make angled runs behind centre-backs should give Wolves a useful outlet on the break against Man City.

Adama Traore is another newcomer who can flourish for Wolves on the counter-attack on Saturday.

Playing for Middlesbrough last term, his power and speed made him one of the Championship’s most dangerous wide men.

Traore stood out as a half-time substitute on his Wolves debut at Leicester, tormenting the Foxes with his quick feet, fabulous balance and frightening pace.

He completed six of seven attempted dribbles at King Power Stadium. Only four players have completed more all season.

Benjamin Mendy, a full-back who loves to fly forward, and the left-sided centre-back Aymeric Laporte will have their hands full containing the Spaniard.

A largely second-string Wolves side held Man City to a 0-0 draw in last season’s EFL Cup, before losing on penalties, so their squad has experience of containing the Premier League champions.

Wolves had just 28 per cent of the possession that night but defended well and always threatened from counter-attacks and turnovers.

That approach may be Plan B, but it suits the players at Nuno’s disposal.

The forwards, Jimenez, Traore, Diogo Jota and Helder Costa, who may lose his place to Traore, are all quick and happy to press.

In Ruben Neves, Wolves also have a midfielder who can pick out team-mates with accurate long passes.

City will start as overwhelming favourites, but don’t discount the home side's threat on the break.

They have an alternative way of playing, and this is the time to execute it.

Part 1: Brighton must seek to stop Wijnaldum
Part 3: How a change of shape has lifted Watford
Part 4: Back four can bring Spurs joy at Man Utd