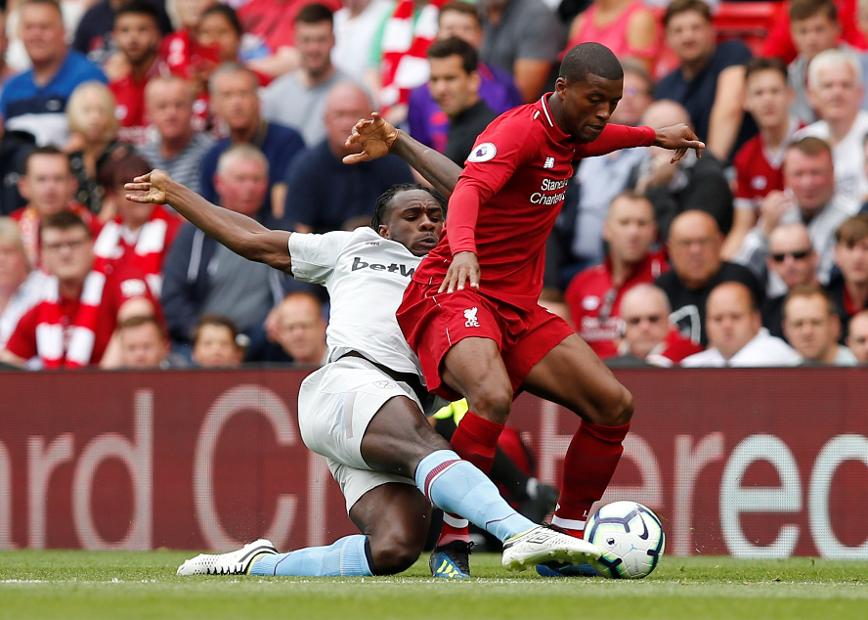 Liverpool manager Jurgen Klopp has found a new role for Georginio Wijnaldum during the early stages of 2018/19.

Widely regarded as a box-to-box operator, he has impressed as the main holding midfielder ahead of new signing Fabinho and club captain Jordan Henderson.

"I think it went well [playing in a three with Naby Keita and James Milner]," Wijnaldum told Liverpool's official website.

"It’s more difficult than it looks because sometimes on the pitch I also want to run forward and to help the attack as well and even score a goal, but when you’re playing in that position it’s not always possible so you have to keep the balance between the attackers and the two No 8s and the defence."

He may be operating in the centre of a midfield three, but Wijnaldum is not a combative ball-winner.

He has won just two tackles and made only one interception across the opening 180 minutes of the campaign.

Instead, his job is to keep the ball moving as smoothly as possible.

Taking limited touches, the 27-year-old is excellent at helping Liverpool pull opponents around with their fast-tempo passing.

He is a quick and efficient distributor of the ball.

This season he has picked out Mohamed Salah, Sadio Mane and Roberto Firmino with only seven passes in total.

His focus has instead been on spreading early balls to Liverpool's attack-minded full-backs.

Wijnaldum has aimed more passes towards Andrew Robertson and Trent Alexander-Arnold than anyone else.

On the other flank, Alexander-Arnold has delivered 16 crosses from open play, the joint-highest figure in the competition alongside Benjamin Mendy.

This Liverpool side can hurt Brighton & Hove Albion in a range of ways at Anfield on Saturday.

Their front three pose an obvious and varied threat, particularly when breaking at speed.

Keita and Milner, the two midfielders either side of Wijnaldum, also have the dynamism and guile to cut through the lines.

And out wide, their full-backs cross with quality.

To prevent Robertson and Alexander-Arnold having a big influence on this encounter, the service to them will need to be stemmed at source.

That means Brighton’s midfield unit of Dale Stephens, Davy Propper and Pascal Gross must close down Wijnaldum’s space and restrict his ability to switch play at speed.

Failure to do this will result in a difficult evening for the Seagulls.

Part 2: Jimenez and hard work can pose problems for Man City
Part 3: How a change of shape has lifted Watford
Part 4: Back four can bring Spurs joy at Man Utd