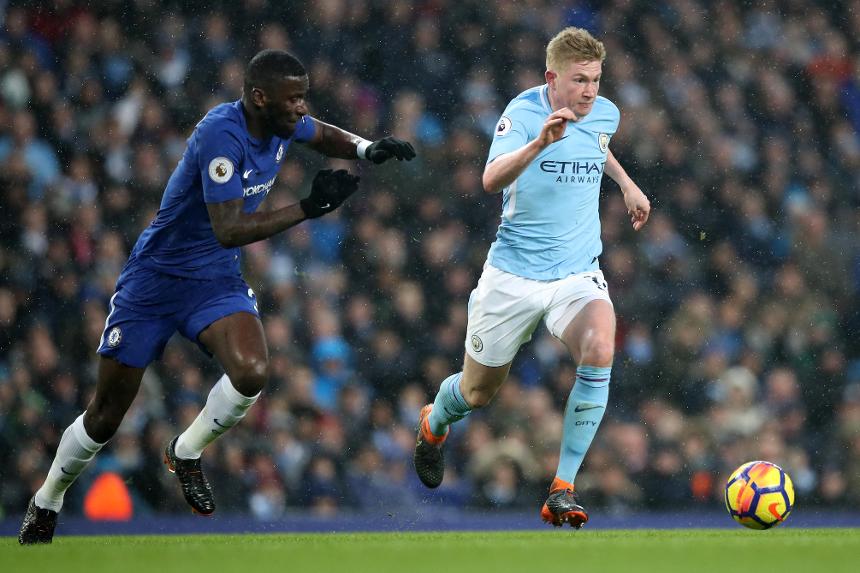 Guardiola sets his sights on points century
Which records have Man City broken in 2017/18?
Can revitalised Salah restore normal service?

Several players have contributed to Manchester City's remarkable 2017/18 campaign, but none can outweigh the influence of Kevin De Bruyne.

Operating in a new role for the first time in his career, the Belgian became the most dangerous box-to-box midfielder in the Premier League.

De Bruyne has provided Pep Guardiola with a bit of everything.

Technique, vision, athleticism and skill have all been embodied by the 26-year-old, who has topped almost every major category relevant to attacking midfielders.

Leroy Sane’s hat-trick of assists against Brighton & Hove Albion this week drew the German level with De Bruyne at the top of the PL standings, with 15 in total.

But nobody can match the range of goals that City’s No 17 is capable of setting up.

Whether it is surging down the middle or drifting wide to create from the flanks, De Bruyne can pick a pass or a cross from just about anywhere.

As the chalkboard below of all his assists shows, only two of the 15 have come from inside the penalty area.

De Bruyne inflicts most of his damage with his right foot, but his left is also destructive.

Five of his eight goals have come from his supposedly weaker left, and three of those have been long-range strikes.

This underlines his comfort with shooting from either foot.

Only Xherdan Shaqiri has scored as many as his five Premier League goals from outside the penalty area this season.

This makes him incredibly dangerous when oppositions give him room inside the final third.

This season strikes from dead-ball situations, breakaways, clever one-twos, and a piledriver from distance against Swansea City have highlighted an extraordinary goalscoring repertoire.

There are only two reasons why De Bruyne has not swept the board with individual accolades in 2017/18; Mohamed Salah’s incredible goal tally, and a tail-off in goals and assists in recent weeks.

The City man has returned just one assist since 10 February and only one goal since 31 January.

However, for the first two thirds of the campaign De Bruyne was operating at a level that was unstoppable.

He has become the ultimate all-round attacking midfielder.