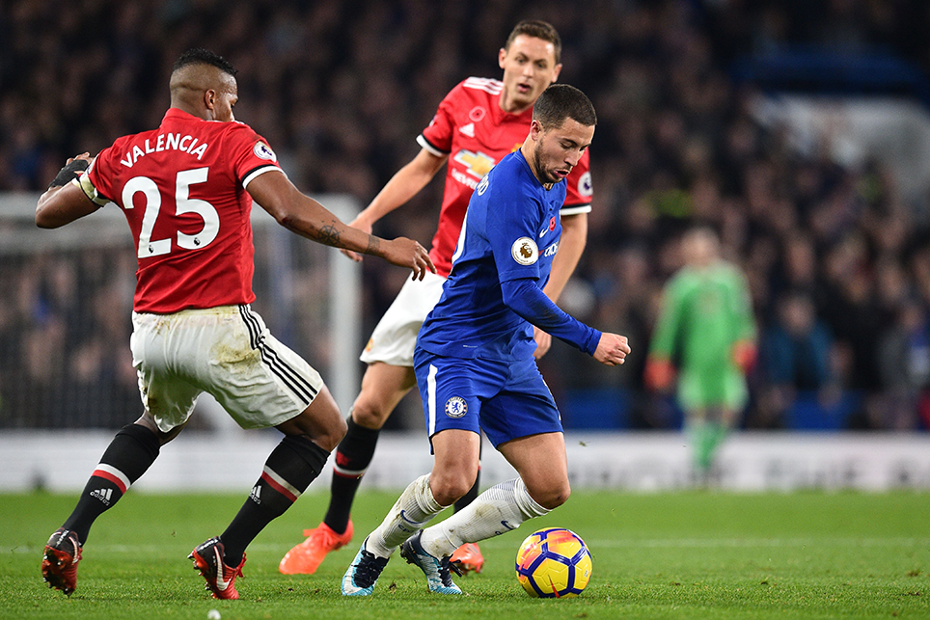 Conte: Ready to play as a team External Link

If Chelsea beat Manchester United at Old Trafford on Sunday, the chances are Eden Hazard will have been instrumental in the outcome.

The Belgian has served up sparkling displays on the road this season.

Indeed, statistically, he has made more of an impact away from Stamford Bridge than on home soil.

Scoring more goals, creating greater chances and making just as many successful dribbles, Hazard has been Antonio Conte’s go-to guy in away encounters.

While his fast and slippery style has always been an asset for Chelsea when they counter-attack on their travels, this campaign’s pattern bucks the trend we usually witness.

This has been Hazard’s most productive season away since joining the club.

Hazard may have made a name for himself as a winger, and Conte likes occasionally to deploy him as a "false nine", but free roles suit him most.

Whether it is as a second striker behind the main forward in a 3-5-1-1 (see below left), or in a left-sided attacking midfield berth within a 3-4-2-1 framework (below right), it makes little difference to the 27-year-old’s performance levels.

Look above at his two-goal displays in respective 4-0 away victories at West Bromwich Albion and Brighton & Hove Albion.

You can see that Hazard occupies the same areas no matter which formation Conte chooses.

Playing with his back to goal as a striker does not bring out Hazard’s best qualities. He has not scored or assisted from that position in the PL this term.

When receiving the ball on the half-turn in pockets of space, then looking to pierce the last line of defence with a clever dribble or a 1-2, he has the ability to hurt any team in world football.

While Willian has impressed greatly in recent weeks, over the course of the campaign Hazard has been Chelsea’s star inside the final third.

He can make dashing bursts beyond defenders to score; he can produce predatory finishes inside the 18-yard box; he can manufacture his own strikes from wide or deep.

His ability to hurt rivals in a variety of ways makes him an invaluable weapon for Chelsea.

Manchester United can ill-afford to take their eyes off him this Sunday.

Even though Hazard’s wizardry seems to help him create stacks of goal opportunities, the stats tell us United should worry more about him as a goal-getter than provider.

This season he has laid on just two assists in 2017/18. This is a far cry from the 11 he supplied in his first PL campaign.

Indeed, neither of those assisted goals were specifically down to Hazard. They were simple passes that preceded individual strikes by Willian and Pedro, against Liverpool and Watford respectively.

I don’t believe he will ever be a natural centre-forward, but you cannot deny Hazard is more of a support striker now than he has ever been.

The quality of his finishing and combination play with Alvaro Morata or Olivier Giroud could decide matters at the Theatre of Dreams.

Part 1: Huddersfield must be bolder on the road
Part 2: Aggressive Hogg central to Town's hopes
Part 3: Benteke and Sorloth to test Spurs' head for heights
Part 4: Cabaye and Townsend set to take aim against Spurs