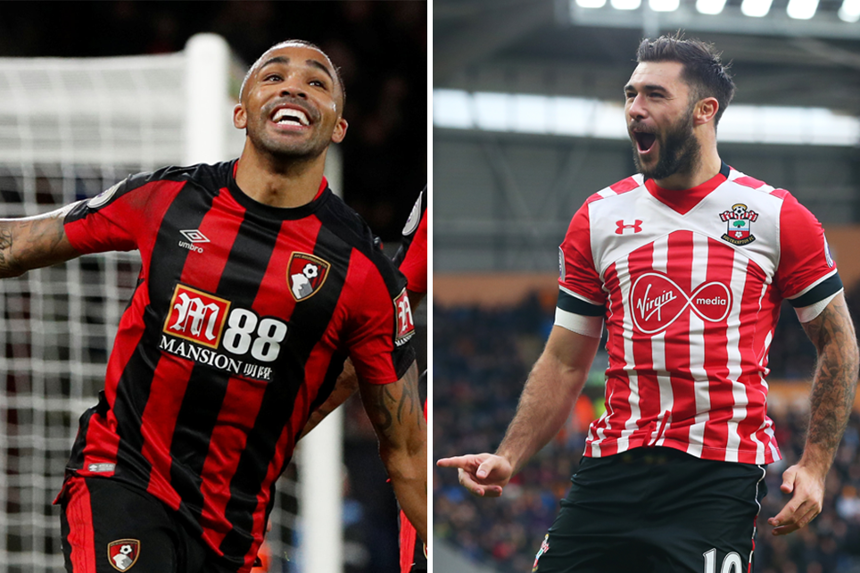 With AFC Bournemouth and Southampton struggling for goals, Adrian Clarke on the two strikers who could be key

Outside of the “Big Six” AFC Bournemouth and Southampton are two of the Premier League’s most confident teams in possession.

Both are comfortable passing the ball to feet anywhere on the pitch and they share similar philosophies that are built around players with good technique, distribution and intuitive movement.

This makes them pleasing on the eye, but during 2017/18 they have both lacked penetration inside the final third.

Between them they have scored only 16 goals from open play and lightweight performances up front areas have cost them points.

For a squad containing Dusan Tadic, Nathan Redmond and Sofiane Boufal, Southampton have not been creative enough.

All three of these attacking midfielders are gifted, but operating as a unit behind the main striker they have offered up too few chances and assists.

No player at Southampton has laid on more than two goals and, in total, only eight assisted goals have been scored by Saints.

On Southampton's travels, the problem has been even worse. They have not scored more than once on the road this season.

In and around the opposition area, their link play has been stilted, the movement off the ball has been too predictable, and the end product of Southampton’s forward players has lacked quality.

Mauricio Pellegrino desperately needs a clinical striker who can build a chemistry with the playmakers operating around him.

He will hope Charlie Austin can be that man.

The striker marked his return to the side with a brace against Everton last weekend and was rested in midweek, probably with Sunday’s south-coast derby in mind.

In terms of getting himself into scoring positions and making the most of the opportunities, Austin stands out as the pick of the Southampton's forwards.

If he stays free of injury he appears the best bet to give Southampton more punch for the rest of the season.

Eddie Howe probably envisaged summer signing Jermain Defoe being his most effective penalty-box striker, but injury problems and a lack of form from the England player means Callum Wilson has since leapfrogged him in the pecking order.

Wilson's hat-trick against Huddersfield Town was a reminder of how his finishing ability and pace down the channels are part of what makes AFC Bournemouth tick as an attacking force.

From low crosses and quickly constructed transitions he is a very sharp and dangerous centre-forward.

They also only have eight assisted goals this season. Jordon Ibe, with three, is the only player to have set up more than two goals.

Wilson will require better service to maintain his impressive start, but a prolonged run in the side should help the Cherries build up better understandings inside the final third, which is something they need.

Sunday’s match is a tough one to call between two shot-shy teams, but don’t be surprised if the fit-again Austin and Wilson have a major say in the outcome.